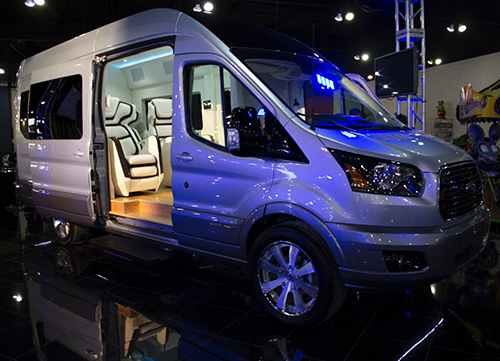 The Transit Skyliner Concept luxury van — designed through Ford Motor Co. and built by Galpin Auto Sports in Van Nuys, Calif. — was unveiled Thursday and offers “an experience unlike any other,” says Tim Stoehr, a Ford spokesman.

“You step into the vehicle and are immediately immersed in the custom interior and high-tech audiovisual environment,” Stoehr says. “The next thing you know, you are arriving at your destination.”

Aimed at high-end commercial fleets and shuttle providers, the Transit Skyliner offers a 52-inch movie screen and motorized table that can unfold for business meetings. Scheduled to go on sale this summer, the customized van serves refreshments via a built-in bar, and offers easy entry and exits with sliding doors that open four feet wide.

“Galpin is especially excited about the launch of the Transit, which builds on Ford’s commercial van leadership with a new design, making it the perfect platform from which to modify,” says Beau Boeckmann, president of Galpin Auto Sports.

The entire interior — from seats to LED mood lighting — is integrated into an automation system controlled through a smartphone or tablet. It also features surround sound, a KVH DIRECTV satellite for HD TV, and a media server that can store the equivalent of 300 Blu-ray movies or more than 1,000 DVDs.

“Transit Skyliner is the ultimate expression of a custom Transit,” Stoehr says. “We created the vehicle to highlight the potential of the Ford Transit platform for the limousine market and to showcase Transit as the next generation of modern, cool, fuel-efficient vans.”

The 2015 Transit Skyliner  — which offers 487 cubic feet of cargo volume and an interior height of 81.5 inches — will make its auto show debut at the New York International Auto Show on Wednesday.