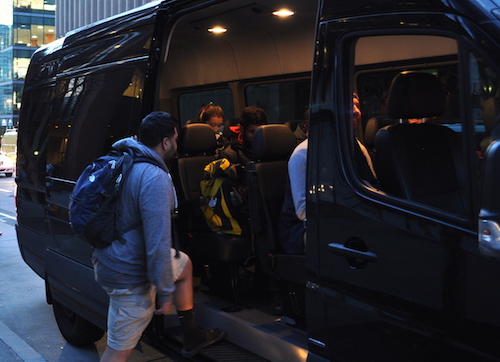 MagicBus, a Silicon Valley-based crowdsourced, public commuter shuttle that offers multiple pickup times and routes every weekday, will launch its service in metro Detroit over the next couple of weeks.

Interested riders can now use the company’s crowdsource campaign tool to let MagicBus know where it should open up new routes around metro Detroit. Campaigns require users to sign up for MagicBus with their email, search for their desired trip, and click “Join the Campaign.” As soon as 12 to 15 people from the area have joined the campaign, a daily route will be launched.

MagicBus riders can then use their phone or computer to book routes ahead of time, as well as change and cancel trips. Riders can track the bus on their phone as it approaches, and they receive a text when it’s time to head to a nearby location and be picked up.

The MagicBus shuttles feature 15 to 20 leather seats and Wi-Fi, which company officials say is optimal for getting work done or relaxing.

“The need for better commuting is particularly strong (in Detroit), says Chris Upjohn, founder of MagicBus. “Cost of car ownership, especially insurance and parking in downtown, is very high. There are limited public transit options to get commuters between suburbs and downtown….With MagicBus, you can create new routes by working together with people from your neighborhood. Together, in Detroit we can build a new and better way to commute each day.”

The company offers monthly passes, pre-paid 10-trip packages, and daily rides, which start at $5. Detroit-based companies, such as Rock Ventrues Family of Companies, will also be offering subsidies to employees who choose to ride MagicBus.

A public event for MagicBus will be held from 11 a.m. to 2 p.m. tomorrow in Detroit’s Cadillac Square. For more information, visit magicbus.io.