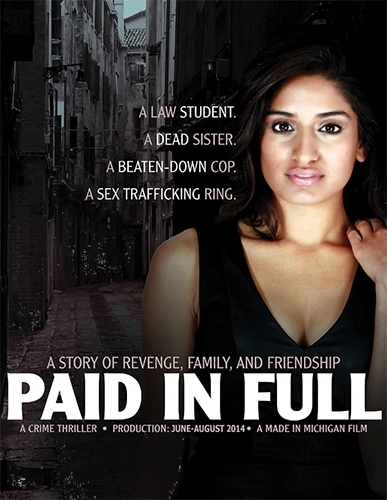 “(Shoreline) goes to 16 of the major film markets around the world, where they promote and market the film and find buyers to sell the movie in every territory out there,” says Nipa Shah, executive producer of the film. “We still have to discuss when and where the world premiere will be held, but we hope it will be sometime in early to mid-spring. And, of course, there will be a premiere in Detroit, but (the details) are TBD.”

The film, which is in the final sound and music phase of post-production, follows the story of a young woman seeking to avenge the death of her sister, who she learns had been forced into sex-trafficking. Shah’s daughter, Nikki, plays the female protagonist, and is joined by a cast including Jonathan Bennett (Mean Girls) and James Russo (Django Unchained).

The film was a first for Nipa Shah, founder and president of Jenesys Group, a Novi-based online marketing firm, and editor of Michigan Be Healthy magazine, and it won’t be her last, she says.

In fact, she and director Lance Kawas are already working on the script for their second project together, a yet-to-be-named family adventure film.

“It’s a little bit of magic, with some good witches — sort of like a cross between Hocus Pocus and E.T.,” says Shah, noting that the film will follow the same sort of parameters as Paid in Full. “It will be a (Screen Actors Guild) film, with a budget under $200,000. And, like any of the films I make, it will be 100 percent made in Michigan.”â€‹