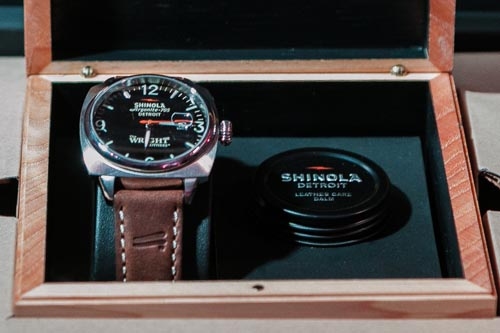 Launched on the winds of yesteryear, Shinola debuted a limited edition watch collection Monday evening at The Henry Ford in Dearborn. Called the Great Americans Series, the Detroit-based designer and final assembler unveiled The Wright Brothers Limited Edition Watch, along with a bicycle, at the original Wright Cycle Shop at Greenfield Village.

The new timepiece is the first in a series of annual watch releases under the Great Americans Series — in 2014 Shinola plans to unveil a pocket watch honoring automotive pioneer Henry Ford — that will be limited to 1,000 units. The Wright Brothers watch, each priced at $1,000, is assembled from 50 Swiss-made components set in a stainless steel cushion case and complemented by a sapphire crystal and a Horween leather strap.

Evoking both Shinola’s founding in Detroit in 2011, along with the Heroes of the Sky exhibit inside the Henry Ford Museum, where the watchmaker presented a piece of the original wing cloth from the world’s first powered aircraft, the Wright Flyer I, to the museum, Shinola President Jacques Panis says the company was inspired by “the incredible history around us.” 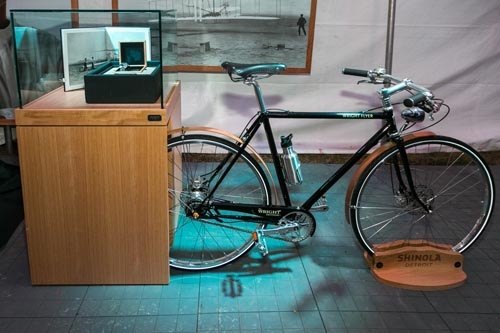 He was joined in the announcement by Edsel B. Ford II, a board member of Ford Motor Co. and a great-grandson of Henry Ford; Amanda Wright Lane, great grandniece of Wilbur and Orville Wright; and Patricia Mooradian, president of The Henry Ford. For Wright Lane, the unveiling ceremony “was like coming home on many levels.”

Having met Wright Lane 13 years ago, Ford said the two “hit it off like two peas in a pod.” In addition to thanking the Wright family and Shinola for the framed piece of cloth, Ford recalled how the automaker funded the creation of a replica Wright Flyer I in honor of the 100th anniversary of the Wright Brothers’ first powered flight (the original flight was conducted on Dec. 17, 1903 in Kitty Hawk, N.C.).

“(Aviator) Ken Hyde faithfully reproduced the Wright Flyer I … and on Dec. 17, 2003 brought the craft to Kill Devil Hill (where the Wright brothers had established their original camp),” Ford says. “The young man tried to recreate the flight, and it went up one, two, and three times, but never really took off. Still, it was an incredible adventure.”

The new watch — the lower portion of the timepiece face reads “The Wright Brothers” — comes in a hickory watch box and is paired with a leather-bound coffee table book featuring photography from the Wrights’ private collection. Priced at $2,950, each of the limited edition bicycles (only 25 will be made) features a jet-black finish, bamboo fenders, and a headlamp, among other offerings.

Pictured at right: Only 25 limited edition bicycles will be made. Photograph by Patricia Gloria.