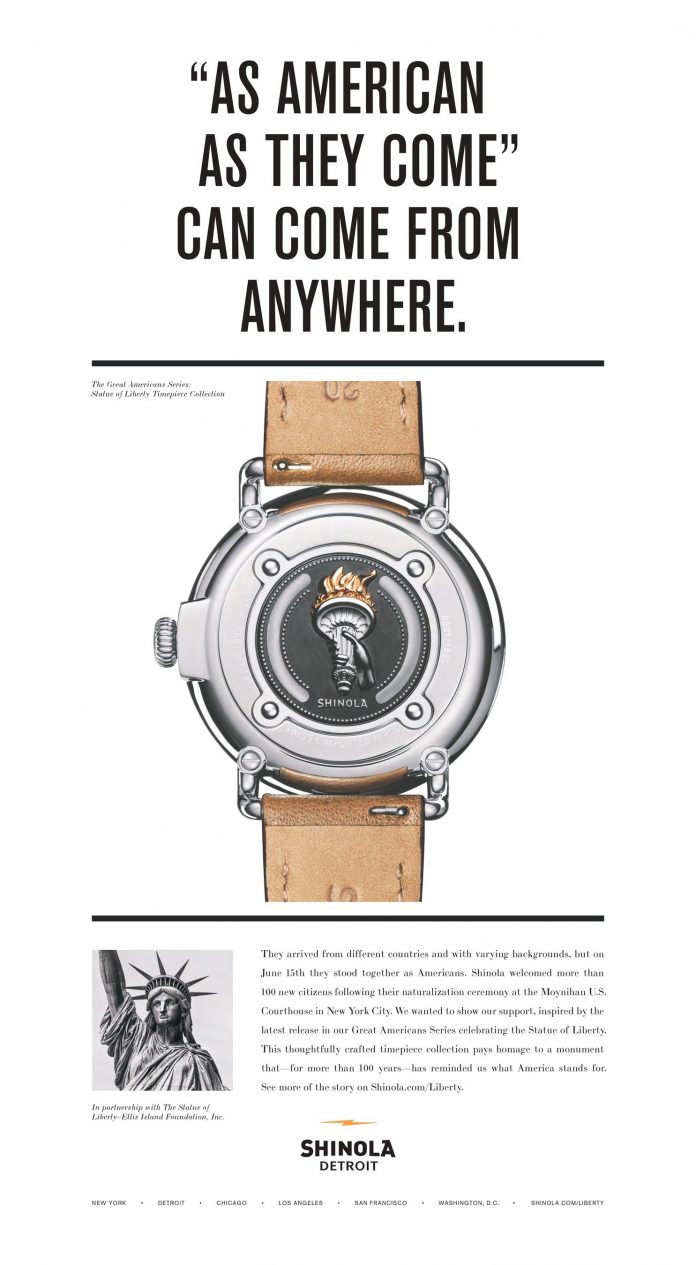 The watches are the latest in the Great Americans Series, a collection of limited-edition watches honoring figures who have helped shape American culture and made a lasting mark on American history. The Statue of Liberty collection is meant to shed light upon those who go through a great deal of time and effort to be called an American citizen, and to invite customers to re-examine their perception of the term “immigrant.”

“At Shinola, we support diversity within our communities and in our American workforce,” says Tom Lewand, CEO of Shinola. “We welcome these newest citizens because with each new perspective, America grows stronger and more whole. We see it every day in our company. We’ve seen it in this country for nearly 250 years. We’re a better nation because of it.”

As part of the unveiling of the new timepiece collection, Shinola gave its flagship timepiece, the Runwell, to some new American citizens when company representatives greeted more than 100 at the Moynihan Courthouse in New York City after a naturalization ceremony on June 15.

Some of the citizens were interviewed, filmed, and appeared in portrait photography to showcase the range of stories that make up the immigrant population. The film, From This Second Forward, directed by Danny Clinch, includes interviews with immigrants in their homes and neighborhoods.

The campaign opens today with a full-page ad in the New York Times.

The collection’s unveiling coincides with For Lady Liberty, a month-long crowdfunding campaign being led by The Statue of Liberty-Ellis Island Foundation to help build the new Statue of Liberty Museum, which is scheduled to open May 2019.

The campaign celebrates the legacy of an 1880s fundraising effort by publisher Joseph Pulitzer that inspired thousands to support the construction of Lady Liberty’s pedestal in exchange for printing the names of donors in his newspaper.