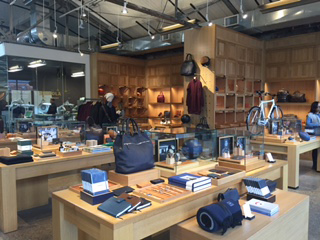 Detroit-based Shinola, the American-made purveyor of watches, bicycles, leather goods, and home furnishings, is doubling the size of its flagship store in Midtown. Starting Saturday, patrons will have more room to preview merchandise, lounge with friends, access a reference library, and visit an in-store café.

“One of our overall goals is to source as much of our products from American suppliers, and the expansion is a work in progress,” says Daniel Caudill, Shinola’s creative director, during a morning preveiw tour of the renovated space. The 1912-era building along Canfield, between Cass and Second avenues, originally served as a sales and repair center for Willys-Overland Motor Co.

“We kept everything as original to the space as possible. We repaired some of the panes in the skylights, kept the exposed steel beams and support columns, and grounded down the aggregate floor with a diamond grinder and gave it a clear-coat finish.”

The Dial Factory within the Midtown store 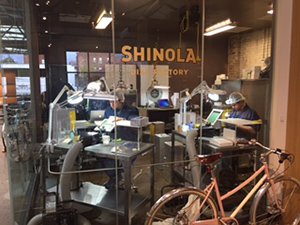 Next spring, the Dial Factory within the store will expand considerably as Shinola moves more of that work to Detroit from China. The production of printed dials will be visible behind large panes of glass. Once the dials are completed, they will be shipped to Shinola’s watch factory in the Argonaut building in New Center.

“I was just visiting a supplier in North Carolina, which produces hickory watch boxes for us, and they said they now have 60 people working for them, which is amazing,” Caudill says. “We also expanded throughout the fifth floor of the Argonaut building, and we are taking over half of the fourth floor in January. We now have more than 500 people working at Shinola.”

Launched in February 2013, the company opened its Midtown store in June of the same year. “The Shinola Café we just added is in keeping with our mission of working with American companies,” Caudill says. “The sandwiches and salads are from Bigalora in Royal Oak, the muffins and other confections are from Sister Pie in Detroit, and our coffee comes from Sightglass Coffee in San Francisco.”

Caudill says the added room within the store will allow for more flexibility, including the addition of a women’s section and new product introductions. For the month of December, the store will offer an area for a leather artisan to stitch patterns as a way to personalize leather goods. “It’s almost like a R&D lab where we experiment with new things,” Caudill says. “We’ll also have more room for monogramming, gift wrapping, and personalization.”

In turn, on Nov. 20, the company will launch the third iteration of its Great American Series called the Muhammad Ali Center watch. The limited-edition watch (400 available) features a stainless steel cushion case, a brown alligator strap with red backing, and comes with three limited edition prints of the former world heavyweight-boxing champion by photographer Thomas Hoepker. The packages retails for $2,250. Shinola’s other watches for the American series honored Henry Ford, and Orville and Wilbur Wright.