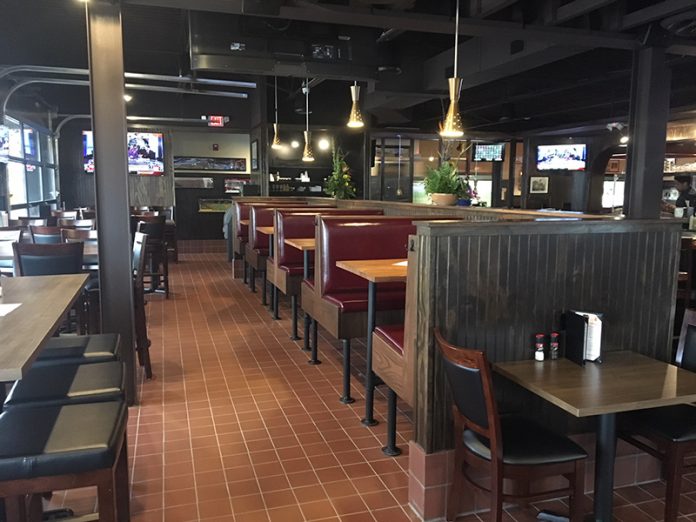 Shield’s Restaurant and Pizzeria has reopened after a $1-million wide-ranging renovation to the interior and exterior. The longtime Troy restaurant has been closed since May.

The restaurant, at 1476 W. Maple Rd., features an open ceiling, new restrooms, TVs, a bar, booths, tables and chairs, a new main entrance and carry out entrance, and garage doors that can be opened in warm weather. Its larger banquet room now can hold 80 people.

“We’re very excited about this all-new concept for Shield’s. We went to the cinder block on all four walls from floor to ceiling for the renovation,” says Paul Andoni, one of the owners. “It’s the same space but looks much bigger because of the walls that were removed, the stage area being gone, and the raised ceiling. We feel that we are now ahead of the competition as far as look, feel, and food. Our new business partner Sam Haj got his restaurant experience in cafes and restaurants in Chicago.”

Andoni says the resturant has new appetizers, burgers, sandwiches, dinners, and salads and also offers Michigan-made products such as Ray’s Ice Cream, Dearborn Smoked Ham, Valentine Vodka, and McClure’s Pickles. Its chicken tenders, many of its dressings, and its salsas are hand-made, and brunch will be available 10 a.m.-2 p.m. Saturdays and Sundays.

Shield’s started as a bar in Detroit in 1937 and later began serving pizzas and salads. It was purchased in 1992 by Paul Andoni and Peter Andoni. It also has locations in Macomb Township and Southfield.