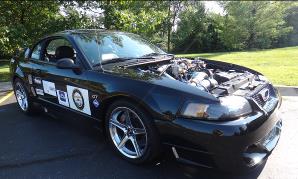 Since Performance CNG in Shelby Township first unveiled its bi-fueled Ford Mustang — which runs on compressed natural gas or gasoline — during last year’s Woodward Dream Cruise, the three-man technical team has been working to improve the horsepower of the engine above the gasoline standard.

“The bottom line is there’s a lot of misinformation, where people think you’re going to lose horsepower when you use CNG (compressed natural gas),” says Daryl Patrishkoff, the startup’s owner and chief engineer. “We figured we’d dramatically prove that point (wrong) with the Mustang.”

Last month, Patrishkoff launched a crowdfunding campaign through IndieGogo, to raise $55,000 for the developing high-performance CNG components. “If you’ve got more horsepower, the same gas mileage, and you’re spewing 35 to 35 percent less emissions, it’s just a winning combination,” he says.

As far as his next project goes — likely a Jeep Rubicon Rock Crawler — Patrishkoff plans to improve torque over the gasoline baseline, something that would be advantageous for businesses with small fleets. “If you’re a snow plow company, you need torque,” he says, noting that he’s in talks with an established Rock Crawler converter about a possible partnership.

In addition to lower emissions, CNG-capable vehicles tend to have a two-year return on investment, Patrishkoff says. “The average price for what we call a GGE, or gasoline gallon equivalent, which is the same energy as a gallon of gas, is $2. On my Mustang, I pay $4.10 per gallon for premium gas, so that’s a $2 savings, which is huge,” he says.

There are two options to fueling a vehicle with CNG, one being slow-fill protocol, which takes about four to eight hours and taps into a residential natural gas line. The other, fast-fill protocol, involves going to a fuel station just like one would for diesel or regular gasoline. However, such stations are few and far between for those living in Michigan.

“There are a few stations in Detroit, close to the airport, some in Taylor, a couple in Ann Arbor, and that’s about it,” Patrishkoff says. “I’m working with some angel investors (regarding) the possibility about putting in some other stations, because that’s key to my success.”