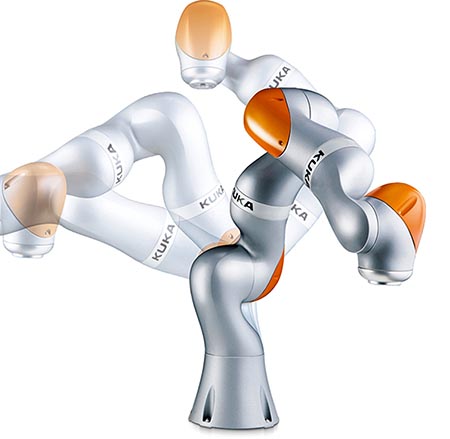 Shelby Township-based KUKA Robotics Corp. will debut an industrial service robot that is “sensitive, compliant, precise, and flexible” at the Automate 2015 in Chicago that opens today.

The lightweight robot, called LBR iiwa, can work directly with humans, acting as a “third hand,” says Rebecca Markel, spokeswoman for KUKA. It can help with work that would normally be difficult and awkward for humans, such as working in confined, small spaces. She says the new robot is an intelligent help and opens up new fields of application in service and medical robotics.

A report published in Intelligent Robots and Systems in 2010 said while robots were able to work in industrial settings, they did not adapt well to dynamic environments nor were they able to interact with humans. Markel says the LBR iiwa robot allows humans to safely work with robots.

KUKA Robotics is the North American headquarters of KUKA Roboter GmbH, a German manufacturer of industrial robots. Kuka robots are used in a variety of industries, such as automotive, aerospace, and pharmaceutical, among others.

The display at Automate will feature an interactive demo of the LBR iiwa robot that will highlight its use for both industrial and medical tasks. Automate 2015 opens today and runs until Thursday in Chicago.