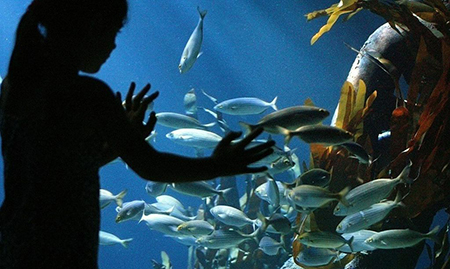 A non-descript 18-wheeler carrying quite the atypical cargo — three blacknose, two bonnethead, and two nurse sharks — will depart from Florida for Auburn Hills Wednesday morning. Following the 24-hour trip, the sharks will be introduced to their new home at Sea Life Michigan, which is set to open to the public later this month.

For the road trip, a specialized team will monitor the sharks throughout the nearly 1,500- mile ride from Marathon. “They’ll be in tanks purposely built for transportation, and there will be regular stops and checks throughout the whole transport,” says Lucy Handel, displays curator of the 35,000-square-foot aquarium at Great Lakes Crossing Outlets.

When Sea Life Michigan opens Jan. 29, the educational attraction will introduce guests to more than 5,000 animals, including string rays, sea horses, and an array of tropical fish. In total, the facility will host more than 250 species.

“All of the creatures (at the aquarium) are here for a purpose,” Handel says. “Sharks especially are very misunderstood, so it’s important that we educate people on the plight of their species. Nearly 100 million are killed each year for their fins (to make fin soup), and their population numbers just aren’t recovering.”

Once the new shark residents reach sexual maturation, they will be introduced into Sea Life’s global breeding program, Handel says. In addition, visitors will be able to attend daily presentations that cover everything from feeding to growing sea life population numbers.

The Auburn Hills site will be located near the Rainforest Café. Once the attraction opens, visitors will enter via an interior entrance in the mall.

This will be the seventh U.S. location for the Sea Life brand, which operates aquariums in Phoenix; Kansas City, Mo.; Dallas/Fort Worth; Minneapolis; Orlando; and Charlotte-Concord, N.C. The company also operates numerous facilities throughout Europe, including the United Kingdom, Germany, Italy, France, and Spain.