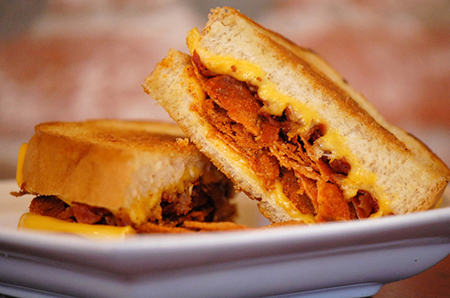 “With all of the unique and fresh ingredients, build-your-own options and vegan, vegetarian, and even gluten-free offerings, we have something for everyone,” says local franchisees James Cox and Paul Cox.

The 2,700 square foot restaurant, at 18875 Traditions Dr., near Seven Mile and Haggerty, will seat 84 and feature nearly 20 different variations of grilled cheese sandwiches, three versions of tomato soup, and salads.

Other menu offerings will include grilled cheese doughnuts with caramelized bananas and blueberry compote, a grilled macaroni and cheese sandwich, and a grilled cheese with barbeque potato chips and bacon. Cox says the entire menu is made fresh, with no fryers, freezers, or microwaves.

Tom+Chee started as a food truck in Cincinnati and grew once the founders appeared on Shark Tank in May 2013. Trew Quackenbush and Corey Ward won a deal with Barbara Corcoran, receiving $600,000 in exchange for 30 percent of the company. The duo’s grilled cheese doughnuts have also been featured on ABC’s The Chew and Travel Channel’s Man v. Food Nation. The parent company has 170 stores under contract in 20 states.