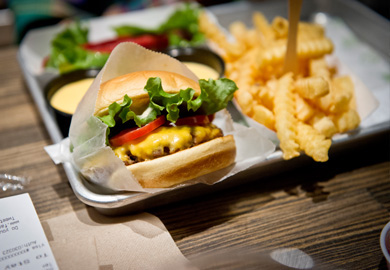 “We’re thrilled to bring Shake Shack to the Motor City,” says Randy Garutti, Shake Shack’s CEO. “The resurgence of Detroit celebrates its storied past and the bright future ahead. We’re honored to play a small part and looking forward to immersing ourselves into the community and contributing to downtown Detroit’s placemaking movement.”

As part of the company’s “Stand for Something Good” initiative, 5 percent of the sales from the Pie Oh My dessert will be donated to Gleaner’s Food Bank, a non-profit that provides local households in need with nutritious food.

The Shack App will be enabled at the Detroit location beginning March 1, allowing guests to order Shake Shack from their phones and schedule a time to pick up their food.

In keeping with the company’s commitment to green architecture and eco-friendly construction, all the tabletops at Shake Shack’s Detroit location will be made by CounterEvolution using reclaimed wood from bowling alley lanes, and chairs will be designed by Uhuru sustainable materials. Booths will also be created by Staach using lumber certified by the Forest Stewardship Council. The restaurant will be decorated with artwork by Detroit-based artist Jesse Kassel, including the mural of a bird’s-eye view of Detroit and its surrounding neighborhoods.