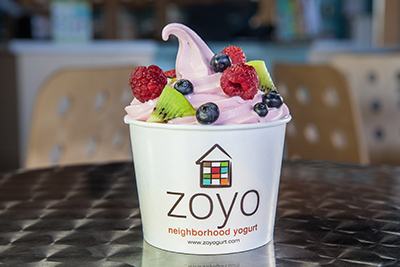 Zoyo Neighborhood Yogurt — a self-serve yogurt shop headquartered in Arizona —  broke into the Michigan market in April with its Troy location, and the company’s regional investors say further expansion plans call for potential sites in Novi, Northville, and Ann Arbor.

“(The Troy store is) really a pilot location for regional development in Michigan and Toledo,” says franchisee Joseph Verbeke, who co-owns the store at 3067 Rochester Rd. with his wife, Emily. The couple also teamed up with Emily’s father, who owns the licensing rights for more than 40 stores in Michigan, and is seeking new franchisees to open their own Zoyo locations throughout the state.

“So we’re in that role that if someone comes to our store and says, ‘Wow, this is amazing,’ they can speak with Emily or me about taking (the next step for a franchise),” he says.

Verbeke says they have secured one franchisee in Ann Arbor and have received some early interest in locations in Novi and Northville. He says he and Emily have plans to open two additional locations of their own in metro Detroit by 2017.

The Zoyo brand — which offers freshly made frozen yogurt flavors, including “Zoatmeal Cookie” and “American Peach Cobbler” — positions itself as a community-gathering place with enough seating where people can interact with one another.

“That’s a big feature of our brand,” Verbeke says. “We have a couple of TVs (inside the store), and when we had the World Cup games on, we noticed that instead of just leaving with their desserts, people sat down and started to talk with one another — even if they came in separate groups.”

The 1,500-square-foot space also includes a glass garage door that can be rolled up in the summer months, a nod to the brand’s Arizona roots. “It’s such a draw for people driving or walking by to see this big hole in the building when the garage door is up. And the summer has been so nice, that we’ve had it open a lot,” he says.