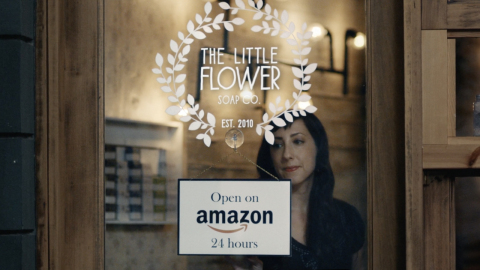 Seattle-based Amazon today announced the opening of Amazon Storefronts, an online store for customers to shop exclusively from U.S. small and medium-sized businesses selling on Amazon. The company is also launching advertising highlighting the venture that features a Michigan business that sells its products through the platform.

With storefronts, customers can shop a collection of more than 1 million products from nearly 20,000 U.S. businesses, as well as watch videos about the business owners. The platform will also highlight a storefront of the week.

“We’ve created a custom, one-stop shopping experience for customers looking for interesting, innovative, and high-quality products from American businesses from all across the country,” says Nicholas Denissen, vice president of Amazon.

“Amazon first invited businesses to sell on Amazon nearly two decades ago, and today, small and medium-sized businesses are a vital part of Amazon’s large selection and commitment to customers. We’re championing their success with this new store and a national advertising campaign featuring a successful Michigan business selling on Amazon to customers across the U.S. and worldwide.”

Holly Rutt, co-founder of Little Flower Soap Co. in Chelsea, is featured in Amazon’s first-ever national TV commercial featuring businesses that sell on Amazon. The commercial can be viewed here.

“Since we started selling on Amazon in October 2016, our sales have nearly doubled,” says Rutt. “Due to our success, we have been able to hire new team members from our community, including full- and part-time jobs. We believe that customers like to know the story behind what they’re buying. When there is worry about creating jobs, it’s reassuring for customers to know their purchases are helping sustain jobs in the U.S.”

Amazon introduced the Small Business Impact Report earlier this year, which found that small and medium-sized businesses selling on Amazon are estimated to have created more than 900,000 jobs worldwide. In 2017, more than 300,000 U.S.-based small and medium-sized businesses started selling on Amazon. The report is available here.

Amazon Storefronts is available through the Amazon.com homepage or at www.amazon.com/storefronts.