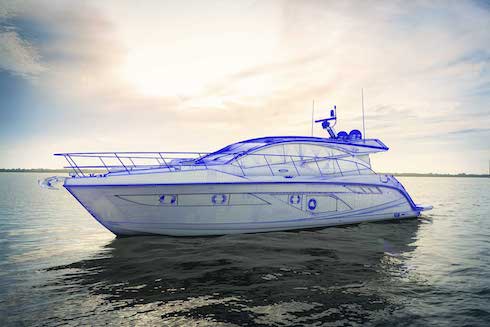 Though most of their work for the past decade has been preparing marketing materials for FCA US, Troy-based digital production studio Midcoast Studio was recently commissioned to create marketing content for the boating industry, including Sea Ray’s content for the 2017 Miami Boat Show, where they debuted updates to their Sundancer line and a new L-class yacht.

Instead of scheduling a photo shoot on the coast, hiring talent, prepping the boats, and chartering a helicopter or a drone for aerial shots, Midcoast tapped its expertise in 3D visualization to create realistic depictions of the vessel with an ocean backdrop.

“We have created image-based content for Sea Ray ranging from promotional materials at various boat shows (Miami Boat Show, Fort Lauderdale Boat Show, and others), to digital content for their website and social media activities,” says Alex Southern, director of marketing at Midcoast. “Sea Ray encountered marketing challenges that many boat manufacturers are facing today, which center around not having boats readily available to photograph leading up to boat shows or product launches.

“When you start adding up the costs of traditional boat photography it’s considerable, especially compared to what our team of 3D artists in Troy can do virtually. We are able to take a background of the ocean and render in a virtual boat. The way we do that is by working with engineering data from the manufacturer — applying realistic textures, lighting, and materials to the data to make it look like an actual photo.”

Southern adds that Midcoast often adds elements like sunlight and ocean spray to make their 3D visualizations as realistic as possible, because the goal is for the final product to look like a photograph.

In turn, Midcoast can create an image of a boat that doesn’t exist yet, as was the case when a luxury yacht manufacturer wanted to market a new 90-foot yacht that would be custom-built to a buyer’s specifications.

“Many times with the high-end yacht market, it operates within a made-to-order business model,” Southern adds. “Once someone purchases a yacht, the likelihood they’re going to let you borrow it for the weekend to do a photo shoot is very, very low. In these situations, we are able to provide 3D imagery, which represents an image capture solution at a significant cost savings.”

Collaborating with the marketing, design, and engineering teams at Sea Ray, Midcoast leveraged CAD design data to produce photo-real boat imagery, with live talent incorporated into the 3D imagery to effectively portray the Sea Ray lifestyle. The resulting visuals were promoted across Sea Ray’s corporate website, along with its Facebook and Twitter accounts, to garner enthusiasm and support leading up to the Miami show. Sea Ray’s online ‘virtual boat builder’, which is currently in development and slated for completion later this year, also makes use of CGI imagery.