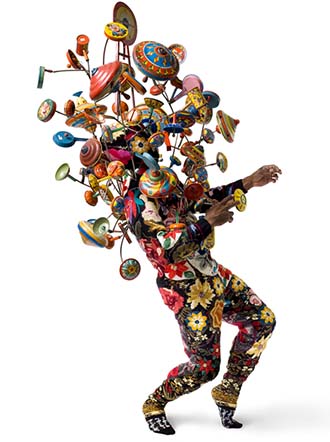 Cranbrook Academy of Arts graduate and well-known artist Nick Cave will have a solo exhibit at the Bloomfield Hills Academy, including a collection of about 30 wearable fabric sculptures, along with other sculptures and his video work. The exhibit opens Saturday.

The 7,000 square foot exhibit, Here Hear, will feature 11 new soundsuits that are on display for the first time. His soundsuits are life-sized, and made of metal, plastic, fabric, hair, and objects. Another gallery will house his artwork and sculptures, including a new work inspired by Trayvon Martin.

Missouri-native Cave, best-known for his Soundsuits, is also a dancer and performance artist. His creations have been called “part Alexander McQueen, part Andy Warhol, and wholly bizarre, brash, and beautiful,” by Artspace. He’s also the director of the fashion graduate program at the School of the Art Institute of Chicago.

Cave has spent the last few months in Detroit setting up photo shoots in locations such as Eastern Market and the Dequindre Cut. Cave will also be holding special events for the next seven months across the city that complement his exhibit.

“My goal is to work with those who live in and love the city, and to reimagine Detroit as an always-surprising environment of creativity, excitement, and engagement,” Cave says.

Performances include Up Right Detroit, in partnership with the Ruth Ellis Center in Highland Park, as well as a procession of dozens of Cave’s life-size horse sculptures on Sept. 26.

Admission to the gallery costs $10. The exhibit runs through Oct. 11. For more information, visit cranbrookart.edu/museum/. â€‹