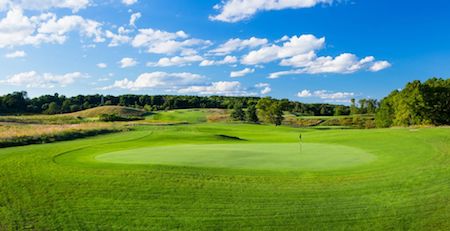 On May 15, Gull Lake View Golf Club and Resort in Augusta, located halfway between Kalamazoo and Battle Creek, will open its sixth course, Stoatin Brae. One of the few courses to be built in Michigan in recent years, Stoatin Brae (Gaelic for Grand Hill) is set atop a 200-foot plateau that offers a 10-mile view over the Kalamazoo River Valley, with downtown Battle Creek visible in the distance.

It will be joined by the opening in summer 2018 of The South Course in Arcadia, an 18-hole “Golden Age parkland-style design” marked by 40-foot changes in topographical elevations, tree-lined fairways, large square and rectangular greens, expansive views, and putting surfaces within close proximity to the tee boxes. The course will be a companion to Arcadia Bluffs in Arcadia, arguably the most celebrated course in northern Michigan (A+ ranking).

“The setting is where Stoatin Brae really differs from what the Scotts have done in the past, as our site was a largely treeless, elevated plateau that offers long-range views that most area courses can’t match,” Schneider says. “The topography is close to ideal, and we came up with a routing that required minimal earthwork, allowing us to focus on the contouring of the green complexes.

“Our putting surfaces contain a bit more contour than you’ll find on other Gull Lake View courses, and we made an effort to limit bunkering to keep the focus on the contour.”

Bill Johnson, vice president and PGA professional at Gull Lake View, says, “Just like all of our courses, we want to keep Stoatin Brea affordable and playable, so the pricing will be dynamic throughout the season.”

The new course will be joined by the Blue Stem restaurant, which will offer a casual, fine-dining menu and be open year-round. “The restaurant is named after a prairie grass native to Michigan and the Midwest,” says Executive Chef Renee Hogge. “We incorporated some traditional Scottish ingredients, using caraway seeds and leeks and cabbage in the menu to blend the two countries (U.S. and Scotland) together.”