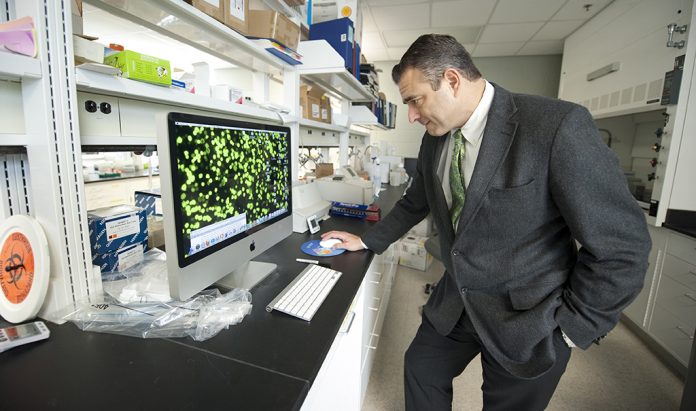 A new study from East Lansing-based Michigan State University has found a malfunctioning gene associated with ankylosing spondylitis, or AS, that is directly linked to the loss of vital immune cells that may prevent the disease.

Endoplasmic Reticulum Aminopeptidase 1, or ERAP1, is a gene known to be associated with AS. The autoimmune disorder often starts in the hips and spines of those as young as 17 and lasts through life. It affects millions worldwide.

In autoimmune disorders, the immune system can’t tell the difference between healthy and unhealthy cells. The result is often an extreme immune reaction in which the body starts to overcompensate and attack itself.

The federally funded study put scientists a step closer to uncovering the role ERAP1 plays in affecting the immune system.

“We’ve demonstrated in mice that loss of proper ERAP1 activity correlates with loss of certain immune cells called Tr1s, which we know are directly responsible for controlling excessive immune responses that can attack healthy tissue and cells,” says Andrea Amalfitano, an Osteopathic Heritage Foundation professor at MSU who was one of the leaders of the study. “Our finding allows us to zero in on the role the gene and Tr1 cells have in AS.”

The response caused by this disease causes bony fusions between the joints of the pelvis and spine, causing chronic pain and disability. Patients can also suffer from other health issues including problems with the gut and intestine.

“We know that Tr1 cells are implicated in digestive issues such as inflammatory bowel disease, and it’s possible that the reduction of these cells is responsible for the increased inflammatory responses we saw in mice and is associated with ankylosing spondylitis as well,” says Yuliya Pepelyayeva, a doctoral student in the microbiology and molecular genetics program at MSU and the other leader of the study.

Both researchers are now testing cells in human blood samples and will move to human trials in the coming years to see if their findings are consistent.

“There’s more work to be done, but a new immunotherapy treatment where more Tr1 cells are infused back into the patient, ultimately correcting the deficiency, could be a possibility,” says Pepelyayeva.

The new treatment could help regulate the way the immune system responds and might correct inflammation in the spine and spinal fusions, she says.

Amalfitano also says scientists can now focus on this potential relationship between gene and immune cell and look at it as a possible cause of other autoimmune diseases.

The study was funded in part by the National Institutes of Health and was published inScientific Reports.