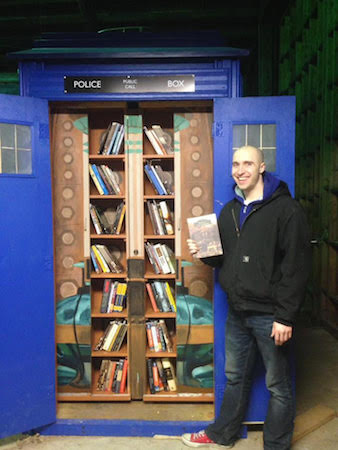 Woodbridge resident Dan Zemke has always wanted to put something in the vacant lot across from this home at the corner of Warren and Vermont Streets, and when he combined his love of the science fiction television series Dr. Who with his passion for literacy, he found his solution. Zemke and his father, W. John Zemke, have spent the past year constructing a 10-foot-tall, life-size TARDIS that serves as a community library for those looking to share and read books.

“I thought it would be really cool to build a TARDIS, but it had to do something practical too,” says Zemke, an outreach and communications coordinator for a Detroit medical center. “I help run the reading program here, and we try to get kids reading between five months and five years (of age) because it’s critical for language and cognitive development, so I decided to combine the two things.”

Zemke then pitched the idea to his dad, a “handy person” and clinical pharmacist by profession, who was immediately on board. The pair has worked on the TARDIS every weekend since Labor Day, combining W. John’s carpentry experience with Dan’s ideas for the structure. TARDIS originally stood for Time And Relative Dimension in Space, as part of the show’s time-traveling nature, but Zemke’s interpretation stands for Totally Awesome Reading Dispensary in Society.

Dan envisions the TARDIS to become a community project, and thinks the location — across the street from Frederick Douglas Academy for Young Men and near a local charter school ­— will make his creation a literary destination. Dan adds that he’s received several book donations already, and plans to collaborate with schools and other partners in the future to continue his efforts. Eventually, Dan wants to provide information regarding health insurance, food, and housing assistance information, as a means of distributing this information for anyone who might need it.

The TARDIS will be installed on at noon Saturday, June 3, after traveling via tractors and trailers from its current home at Dan’s parents’ house in Pinckney.