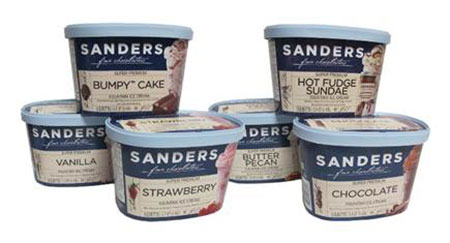 Clinton Township-based Sanders has released its new ice cream line — including a mix of longtime favorites Bumpy Cake and hot fudge, as well as some more traditional flavors — in its retail shops throughout Michigan, with plans calling for a national rollout next year.

Flavors for the “super-premium” ice cream — meaning it has higher density than standard offerings, is made with less air churned into the mixture, and contains a greater amount of butterfat — are based upon the early 20th-century recipes created by the company’s founder Fred Sanders.

The line took two years of research and development to formulate, says Brian Jefferson, chairman and CEO of Sanders and Morley Candy Makers.

“During the development process, we stayed committed to relying on original recipes that would allow our customers to experience a bit of nostalgia, as if they were sitting on a barstool enjoying ice cream at a local parlor,” Jefferson says. “This new line also closes the gap; along with our cakes and deep dish brownies, we now offer the opportunity to enjoy a real hot fudge cream puff at home using the same ice cream, toppings and cream puffs as our stores.”

Besides Bumpy Cake and hot fudge, the new flavors include vanilla, chocolate, butter pecan, and strawberry, and will be packaged in 1.5-quart cartons featuring nostalgic touches, such an image of ice cream in an old-fashioned fountain glass.

Sanders has teamed up with Guernsey Farms Dairy in Northville for the manufacture of the new product line, Jefferson says. “We took great care to source a supplier that would be able to meet our unique small batch requirements, while also being sure they have large enough production capabilities to handle our national sales needs.”