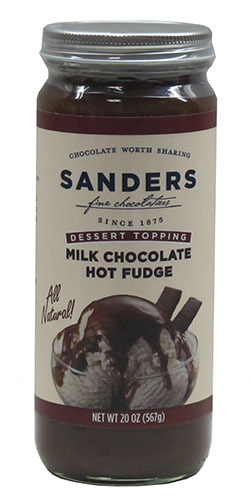 “We are serious about providing our customers with (founder) Fred Sanders’ timeless original recipes using real ingredients,” says Brian Jefferson, chairman and CEO of Sanders, established in 1875 and now owned by Morley Candy Makers in Clinton Township. “We take comfort in knowing Guernsey is the right company to help us achieve that goal.”

This isn’t Guernsey’s first foray into the ice cream market — Guernsey branded ice cream is already available in the nine Sanders Chocolate & Ice Cream Shops in southeastern Michigan — although it does considerably extend the reach of the family-owned operation.

“With our long-standing ice cream expertise and Sanders’ place as the originator of so many ice cream firsts, this partnership just makes sense,” says Martin McGuire, president of Guernsey Farms Dairy. “This is a great opportunity for Guernsey to expand its reach beyond southeastern Michigan, while maintaining the quality and nostalgia both Sanders and Guernsey are known for.”

The companies will celebrate their collaboration at the Fifth Third Bank Michigan State Fair, to be held Labor Day weekend (Aug. 29-Sept. 1) at the Suburban Collection Showplace in Novi, where the Guernsey booth will offer Sanders’ hot fudge cream puffs and Guernsey’s chocolate milk, among other treats.