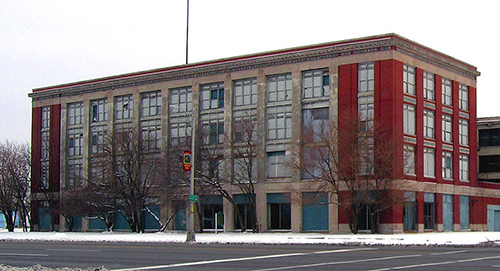 The Woodward Avenue Action Association and the Highland Park Tax Increment Finance Authority have completed the purchase of the former administration building and executive garage at the Ford Highland Park Plant for $550,000 from Bloomfield Hills-based National Equity Corp.

The association acquired two of the eight buildings on the 120-acre site at Woodward and Manchester. The plant, which included a foundry and a power plant, produced millions of Model Ts starting in 1910 and was where auto pioneer Henry Ford launched the $5 workday in 1914.

The Model T was initially designed and produced at the Ford Piquette Plant at Beaubien and Piquette in Detroit in 1908. Today, the three-story complex serves as a museum and an events center, and is operated by the nonprofit Model T Automotive Heritage Complex Inc.

WA3, which works to enhance and improve Woodward Avenue, which runs for 27 miles from the Detroit River north to Pontiac, ultimately hopes to purchase the plant in Highland Park, which today serves as a storage warehouse, Patrick says. In the meantime, the organization will commence grounds cleanup and soon launch a $7.5-million capital campaign for the renovation of the Albert Kahn-designed headquarters and executive garage.

“The building has not been occupied since the mid 1970s,” says Deborah Schutt, executive director of the association. “With no heat and some of the windows being broken, there’s damage throughout the building. Not to mention you probably can’t find a stitch of plumbing because it’s been scavenged.

“We’ll be preserving the most historic aspects but we’re really talking about re-doing everything.”

Once renovations are complete, the organization plans to open a welcome center on the first floor of both buildings. “As opposed to a museum, which is more of a learning experience, this will be an open door (where we will share) the things to see and do to experience automotive heritage in southeast Michigan,” Schutt says.

To sustain the welcome center within the four-story, 40,000-square-foot brick headquarters structure, Schutt says the organization will rent out space on the administration’s other three levels. Currently, WA3 is in talks with Wayne County’s Economic Development Growth Engine about creating a learning facility centered on cutting-edge manufacturing and integrative technologies. “We’re not looking to teach people an assembly line job, but rather how to keep the assembly line running,” she says.

Other uses for the headquarters building include a movie theatre showing historical footage of the plant, interpretative displays, historic vehicles, and a gift shop.