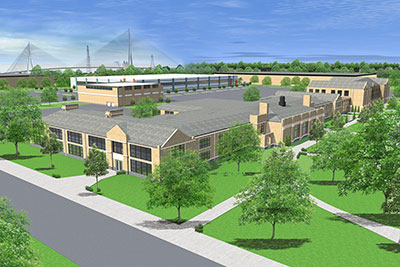 “This project shows how working together — state and city, alongside business and community leaders — can make a positive, meaningful difference and produce real jobs and opportunities for our citizens and communities,” says Gov. Rick Snyder.

Sakthi Autmotive plans to expand production of lightweight aluminum castings that will support the fuel efficiency initiatives of automotive companies. Lightweight metal auto components are currently produced in China, but will now be manufactured by workers in Detroit.

The 70-acre campus will contain about 1.2 million square feet of space across four facilities. Construction will begin immediately and is expected to be complete by the end of 2017. Sakthi also entered into purchase agreements for the old GM Fisher Body plant on Fort Street and the former American Mailers building.

Sakthi Automotive’s parent company, Sakthi Group, is an India-based conglomerate with operations in sugar, dairy, automotive supplies, among others.

“It’s to our advantage to be near our customer base, including General Motors, Ford Motor Co., and many other OEMs,” says Lalit Verma, CEO of Sakthi Automotive. “Detroit is our global technical headquarters to support all of our overseas business units in India, China, Europe, and other locations.”

“This project is a prime example of how cooperation between the State, the City, Detroit Public Schools and the private sector can help create jobs and preserve our city’s heritage,” says Mayor Duggan.  “Sakthi is making a major commitment to Detroit and is creating employment opportunities for our residents that otherwise would have remained overseas.”

In April, the Michigan Strategic Fund approved the expansion of Sakthi Automotive Group to establish its first North American manufacturing operation in Detroit. Michigan was chosen over competing sites in Georgia, Ohio, and South Carolina.