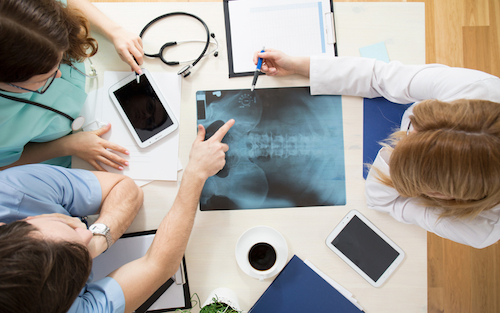 “(The partnership) will provide an enhanced opportunity for SVSU’s premedical students who demonstrate a desire to practice medicine in Michigan with an emphasis on rural and underserved regions,” says Dr. George E. Kikano, dean of the CMU College of Medicine.

The CMU College of Medicine welcomed its inaugural class of students in 2013, which will graduate in May 2017. The college now has a full complement of students among all four years of study, with 80 percent of students coming from Michigan.

Founded in 1892, CMU has more than 20,000 students at its Mount Pleasant campus and another 7,000 enrolled online and at more than 40 locations across North America, including six locations in metro Detroit. The university offers more than 200 academic programs at the undergraduate, master’s, specialist, and doctoral levels.

In related news… McLaren Greater Lansing has made a $1.5 million gift to Michigan State University in East Lansing to establish a new endowed chair for behavioral mental health nursing education position at the university’s College of Nursing. The new position is the college’s first endowed chair position.

The new position will support the development of nursing competencies in mental health and improved patient outcomes among undergraduate and graduate students, as well as McLaren nursing staff.

“The individual that fills this position will bridge MSU faculty and students with the McLaren Greater Lansing nursing team by improving mental health in the community,” says Randolph Rasch, dean of the College of Nursing. “Together we will work on the frontlines with patients, addressing the ongoing education needs of nurses, developing their behavioral health nursing skills, and building a healthier community.”

The commitment from McLaren Greater Lansing, which is the college’s second largest donation, brings the number of endowed faculty positions created through MSU’s Empower Extraordinary campaign to 60. A goal of the capital campaign has been to increase endowed faculty chair and professorship positions by 100 people.