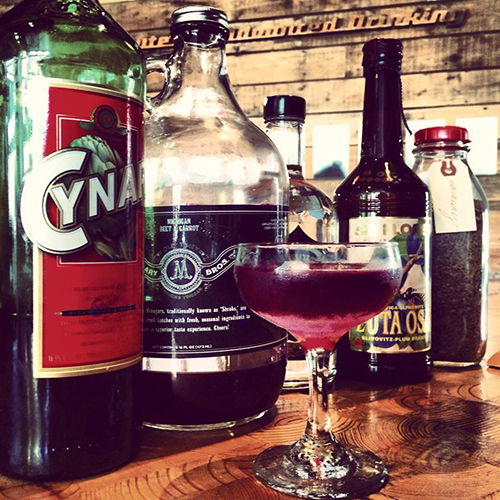 Not too long ago, finding a craft cocktail in metro Detroit could be rather difficult, says Travis Fourmont, cocktail ambassador of Great Lakes Wine & Spirits in Highland Park.

“When I first moved here (from Oregon), no one was (making craft cocktails),” Fourmont says. “There were some old-school steakhouses or places in Birmingham that would have some of the classics, like a Manhattan or a Negroni, but in terms of that elevated sort of craft scene, I didn’t know of anywhere.”

But today, Fourmont says there are several places that serve craft cocktails in the region — meaning there are more than enough bartenders and businesses to feature signature drinks at the inaugural MI Cocktail Culture event, to be held April 5 at the Royal Oak Farmers Market.

Organized by Liquid Events Detroit and Bailout Productions, two organizations that aim to promote food and drinks in across the state, the event will showcase beverages from a dozen different venues, including The Oakland Art Novelty Co. in Ferndale, The Root Restaurant in White Lake, and The Sugar House in Corktown.

Other participants include Robyn Cleveland of The Ravens Club in Ann Arbor, who will represent the U.S. Bartender’s Guild – Greater Detroit chapter with two drinks, one being a tequila-based Smoke on the Water, featuring smoked watermelon soda, fresh lime juice, and clementine-infused aperol. Cleveland believes the growing interest in craft cocktails is less a trend than it is a shift in culture.

“People aren’t drinking more, but they’re drinking better,” says Cleveland, founder of the guild’s Detroit chapter, which has grown from 25 to 90 members since it was first founded in February 2013. “I think it goes hand-in-hand with craft beer and people wanting locally sourced foods. They want to know what they’re drinking, where it came from, and what went into making it.”

Fourmont says he has noticed a parallel between the growing craft cocktail culture in metro Detroit and what he witnessed in Portland in the early 2000s. “Looking at the trends, it’s just so similar. You got your first wave in cocktail bars, then there was a little bit of resistance, but then everyone slowly started to realize, ‘Whoa, they’re just cocktails.’ And then all of the cocktail geeks started rolling together and the bar owners started collaborating,” he says.

As far as why he foresees craft cocktails continuing to grow in popularity in metro Detroit, Fourmont says the benefits are two-fold. Not only does it allow room for bartenders to be more creative and to make a career out of their craft, but business owners and managers may find a financial gain there as well. “If you look at costing out a food menu, you see how complicated it is. Then you cost out a drink list and you realize you’re at 18 percent cost — that’s all profit,” he says.

In regards to the upcoming MI Cocktail Culture goes, Jason Dristan of Liquid Events Detroit expects attendance to include about 1,200 people, including vendors and volunteers. He adds that visitors shouldn’t expect the typical gin and tonic or whiskey and coke either.

“These are very thought-out cocktails,” Dristan says. “We want to bring exposure to the places that are producing these types of drinks on their menus around town. Our plan is to turn the Royal Oak Farmers Market into one giant speakeasy.”

Tickets for the event — which benefits the nonprofit horseback riding program Camp Casey — are $40 in advance, $50 at the door, and will include 15 beverage samples. Food will be available for purchase from StrEAT Detroit’s fleet of food trucks. For more information, visit micocktailculture.com.