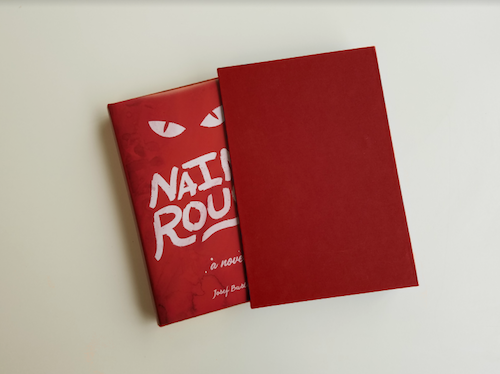 Folkteller Stories, a Royal Oak-based publishing company, will release a compilation of its Nain Rogue trilogy on Oct. 1 that features new cover art and interior illustrations.

Comprised of three parts —The Red Legend, The Red Tide, and The Red Truth — the novel, Nain Rouge: The Crimson Three, is a historical fiction story about a mythical creature, called the Nain Rouge, that lingers in the City of Detroit in the early 18th century. The creature causes trouble that results in two teenagers having to fight an invisible war to protect the world.

“It’s a great opportunity…to update and bring a unique feel to the books by bringing a 300-year-old legend from around the world to the city of Detroit,” says Josef Bastian, author of Nain Rogue: The Crimson Three and co-founder of Folkteller Stories.

Partnering with illustrators Patrick McEvoy and Bron Coveney, the novel’s cover features the red eyes of Nain Rouge and charcoal drawings can be found throughout its pages.

Bastian says with the new developments in Detroit, along with the upcoming Halloween holiday, it felt like the right time to release the new trilogy.

“The (trilogy) will offer a scary and fun story aimed towards young children from ages 10 and up, from middle school to high school,” he says.

Folkteller Stories is also offering a “Crimson Ticket” promotion where people can print out a ticket and bring it to the comic convention or book signing for a chance to win a hard cover, encased volume of Nain Rouge: The Crimson Three. Only ten copies of the limited edition novel will be made.