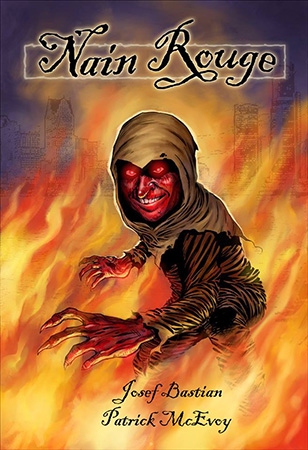 Royal Oak-based Folkteller Stories has teamed up with Caliber Comics for the national release of a graphic novel illustrating the story of the Nain Rouge, a mythical creature that cursed the city of Detroit starting in the early 18th century.

“What this really does is it gets the (Nain Rouge) story out of Detroit and on to the rest of the world,” says Joseph Bastian, co-founder of Folkteller and author of the graphic novel and three books chronicling the history of the Nain Rouge.

The Nain Rouge: The Red Legend graphic novel is now available in about a dozen local comic stores. On a national basis, Northville-based Caliber will work with retail stores to bring the print versions into their inventory, Bastian says.

He adds that the partnership concerns both the print and digital versions of the book. In addition to selling the graphic novel, Caliber — which has published more than 1,300 comics and graphic novels — has also broken the story up into three separate digital comic books, which will be available in the coming weeks.

The story is the same, but each book features different art on the front and back covers, designed by Patrick McEvoy. “For people who are really into comics, the artwork is a big thing. This way, they can have three different books featuring unique artwork,” Bastian says.

Now that the Nain Rouge has secured national distribution, Folkteller Stories is one step closer to putting its plans for a feature film based on the book into motion. Bastian says if all goes well, filming could start by late 2015.

Bastian and partner Carl Winans will be signing copies of the 84-page book, priced at $20, at several comic stores throughout metro Detroit, including Comic City, Green Brain Comics, Fun4All Comics, Rogues Gallery, and more. For more information regarding the signing schedule, click here.