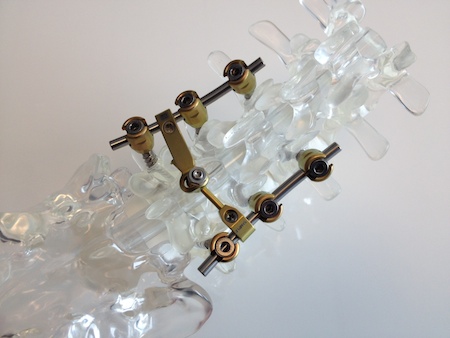 Royal Oak Medical Devices in Rochester Hills announced this week that it will expand its distribution of orthopedic spinal implants and instruments, sold for up to 70 percent less than traditional price points, nationwide.

“From a market standpoint, based on what we’re seeing and what’s happening in the health care industry, you’re going to see a lot more attention to the bottom line from all entities,” says Chris Lievois, president of Royal Oak Medical Devices. “And businesses likes ours will be very important in that change. “

The business model is relatively straight forward, with the company selling its products directly to hospitals and surgical centers, eliminating the need for — and costs associated with — outside sales representatives. With its vertical integration with parent company Royal Oak Industries, the medical firm serves as both manufacturer and seller to the end user.

Lievois describes the approach as “trying to cut the fat of a bloated distribution network.” Other distribution models, for instance, may have a rep in the operating room during surgeries, resulting in added costs to the product. With Royal Oak Medical Devices, the company keeps it simple, providing the instruments, training, and any needed follow-up services, such as troubleshooting or restocking inventory, he says.

Since forming in 2009, Royal Oak Medical Devices has already extended its reach from Michigan into northern Illinois and southern Wisconsin. Lievois says he sees the most potential for new sales along the East Coast and in the southern states, where there are larger concentrations of smaller hospitals concerned with budgets and overall costs.

In a given year, the Michigan company produces up to 1,500 implantable screws and up to 500 plastic spacers used during spinal fusion surgeries, and has the capacity to grow at least 10 times that size in its current building.

“Our experience has been that the growth should be manageable because it’s relatively slow,” Lievois says. “Surgeons have certain instruments and implants they like to use, so there’s a teaching process (that goes into showing) them our products and how to use them. But it works to our benefit because were able to spend some time with them and have a measured growth that we are easily able to manage.”