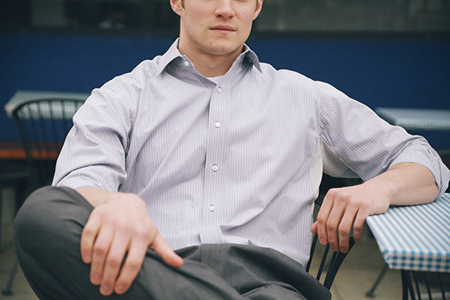 Jeff Schattner — who describes himself as a CPA by day and an entrepreneur/dad by night — may not have much of a fashion background, but he is a problem solver.

After sweating through his shirt onto his suit during a friend’s outdoor wedding last summer, he sought out a solution. “I wanted something that had the classic crisp look of a dress shirt but also had the lightweight, breathable feel you would find in a jersey or dry fit material,” says Schattner, who lives in Royal Oak and works for Chrysler Group.

The shirts will be available online by September and in retail space provided through The Runway, a fashion incubator in Lansing expected to open in early fall. Schattner also plans to offer the shirts in local retail stores.

“I’m going to approach local shops by working on a consignment model, where really, there’s no risk for them,” Schattner says. “As a startup, you’re not going to get a lot of new stores to purchase your shirt up front.”

That’s not to say Schattner lacks confidence. His shirts are being manufactured at Michigan Fashion Proto in Lansing, a full-service apparel sample room that has the capability to manufacture up to 500 units at a time. Rebecca Clark, a former design director for labels including Simply Vera, Vera Wang, and Daisy Fuentes, owns the facility.

In time, Schattner — who is nearing the end of a Kickstarter campaign for the startup — plans to add more casual options as well as a women’s line.