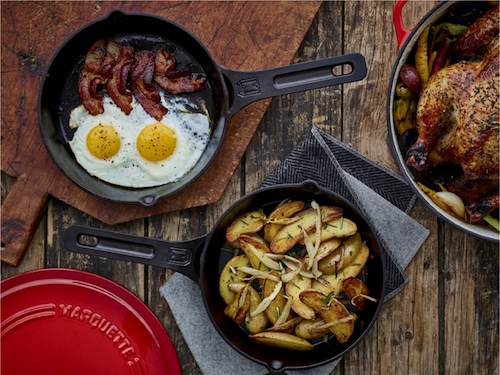 Royal Oak-based Marquette Castings is launching its new line of lightweight cast iron skillets that are primarily sourced from recycled iron, and are pre-seasoned.

Company officials say the skillets are designed to offer all the benefits of classic cast iron cookware, such as storing heat, durability, and versatility, without the added weight. Available in three sizes — eight-inch, 10-inch, and 12-inch — they feature a smooth finish and will arrive to consumers pre-seasoned with four coats of baked on flax seed oil.

“We wanted to create something that could introduce a new generation of cooks to the joys of cast iron while also capturing the ease and convenience consumers look for today,” says Eric Steckling, co-creator of Marquette Castings. “We spent an extensive amount of time researching and testing to make sure our product was truly something shoppers couldn’t find somewhere else in a price point that was attainable.”

The retail price for the skillets ranges from $104 to $134, depending on the size.

Marquette Castings is using a Kickstarter campaign to support the launch of the skillets. People who donate to the campaign will have first access to the products as well as incentives for the launch.

The company plans to begin production on the skillets next month, with the first run ready for shipment in January. Once in full production, Marquette Castings plans to sell the cookware on its website, Amazon, and at other retail outlets.

The company’s products were designed in Royal Oak, while initial manufacturing will be done in the Hebei region of China. The company is currently exploring domestic manufacturing sources of the skillets, including Michigan.