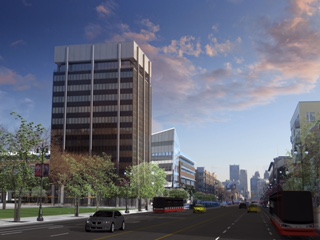 The Roxbury Group today announced it will invest $20 million in the redevelopment of the former Professional Plaza Building in Midtown Detroit into a residential tower. Construction will begin this spring, with an expected completion in 2016.

“The renovation of this highly visible landmark property in Midtown is another signal that developers are recognizing the strong demand for quality housing in the Midtown neighborhood,” says Susan Mosey, president of Midtown Detroit Inc.

The Detroit-based real estate development company, which recently completed the redevelopment of the David Whitney Building overlooking Detroit’s Grand Circus Park, will add 12 stories of apartments and retail to the Midtown building, while also restoring elements of its mid-century design. When done, the building, now called “The Plaza,” will include 75 apartment units and 2,000 square feet of retail.

The architectural restoration will feature an all-new glass facade, as well as restoration of the exterior masonry and the grounds surrounding the building.

David DiRita, a Roxbury Group principal, credits the decision to restore the structure rather than demolish it to a strong working relationship with the current owners, who are developers of the neighboring University Physicians Group office tower now under construction, as well as rising real estate values in Midtown.

“Gary Novara and his partners at Midtown Project LLC certainly preferred to save the building, but it was clearly obsolete as an office tower and until recently wasn’t financially feasible as a residential conversion,” DiRita says. “The Ferchill Group and Midtown Project LLC have made a real commitment to the district with the development of the new UPG building. We believe the redevelopment of the Plaza into a first-rate, mixed-use property will strongly complement their development as well as the other major investments occurring in Midtown.”

Detroit-based Walbridge will serve as construction manager, while Quinn Evans Architects has been selected as the architect and historical consultant.

“The Plaza is a great example of many partners coming together to increase density in the Woodward Corridor,” says Melinda Clemons, senior loan officer at Capital Impact Partners, which is providing financing for the project with Invest Detroit. Additional funding support will come from Michigan Economic Development Corp.