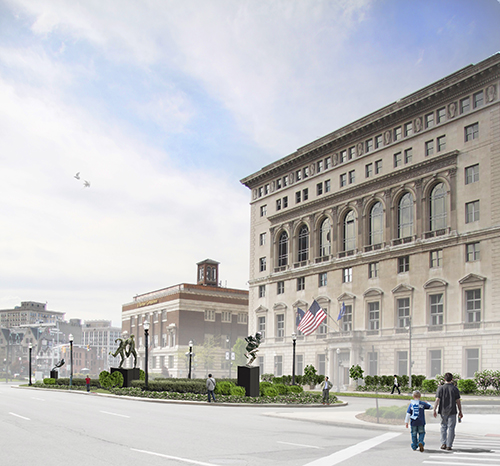 In honor of its 100th anniversary on Madison Avenue and 128th year as an institution, the Detroit Athletic Club has commissioned four larger-than-life bronze sculptures that will be installed and unveiled next April.

Colorado-based A. Thomas Schomberg, known for sculptures including Rocky in Philadelphia, is heading the creation of the four pieces, says Ted Gillary, the club’s executive manager. “He has a great style representing the intensity of sports and athletics. The club has worked with him on a couple of small sculptures that we’ve done in the past for awards.”

The nine-foot-tall statues, to be set on nine-foot-tall pedestals and internally reinforced with high-density steel, will commemorate the role the club has played in amateur athletics and professional sports since its inception in 1887, Gillary says.

“The sculptures will be a very visible and dramatic statement about renewal in Detroit and a landmark moment in the Detroit Athletic Club’s history in the community,” Gillary adds.

Three of the sculptures — The Finish, Running Back, and 6.4.3 — will recognize the club’s heritage in relation to track and field, football, and baseball, respectively, from the median in front of the clubhouse’s front entrance. The fourth, The Start, will celebrate its history in swimming near the building’s Randolph entrance.

“When the club reopened on Madison Avenue, they had a swim program and pool on the fourth floor, and they hired a man named Clarence Pinkston, who (coached) Olympic swimmers and divers — both men and women,” says Gillary, noting The Start will portray a female swimmer. “Women were not involved in the original club on Woodward, but they became involved when it opened here in 1915.”

The original club formalized what was a solid friendship among leading business executives, mostly from the automotive industry, when it opened on Woodward, just north of what is now the Whitney Restaurant, in 1887 (though planning for the club dates back to 1883).

The original club, which spanned two city blocks, included a running track, various sports fields, grandstands, and a clubhouse. As the city began plotting streets in the area, a handful of future members erected a temporary building on the site, thereby blocking the addition of a street through the property. That’s why Garfield Street doesn’t run through the west side of Woodward.

When the new clubhouse, designed by Albert Kahn, opened in 1915, it attracted hundreds of members including Henry Ford, John Kelsey, and Henry Joy. Since then, the club has attracted kings, queens, princes, several presidents including Woodrow Wilson, and served as the center of planning for everything from the Lincoln Highway Association to the buildup of armaments leading up to World War II.

The nearly $2.3-million sculpture project is being funded by the Detroit Athletic Club Foundation, which will maintain the property surrounding the sculptures, including paving and lighting, Gillary says.