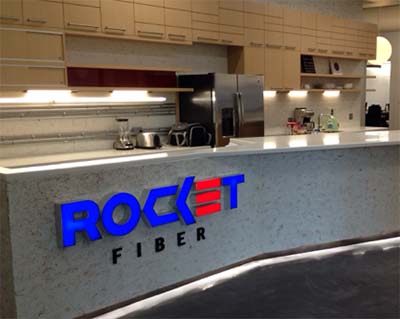 Detroit-based Rocket Fiber, a new gigabit Internet network that provides up to 10-gigabit speeds for residential customers and up to 100-gig speeds for businesses, today opened its headquarters on Woodward Avenue in downtown Detroit.

“Rocket Fiber’s mission is to develop and implement critical technology infrastructure that will contribute to transforming Detroit into one of the most attractive cities for technology and other businesses to locate,” says Randy Foster, co-founder and chief technology officer for Rocket Fiber. “Ten-gigabit Internet will put Detroit in an elite category…”

Rosetti’s Tony Reiner, the lead designer of the project, says the space has an open workspace, a centrally located kitchen, and a sky-blue ceiling in the lobby.

Rocket Fiber was founded about 18 months ago and has 30 employees. The company will begin offering its service to residential and commercial customers in Detroit. The service offers residents the ability to download a one-hour and 40 minute movie in 40 seconds.

Rocket Fiber has already laid 17 miles of fiber in the city and began activating clients earlier this month in downtown Detroit, including The Albert and Malcomson Buildings, along with nearly 20 office buildings such as the First National Building and One Kennedy Square. The company is expected to expand to Detroit’s Midtown district next year. â€‹