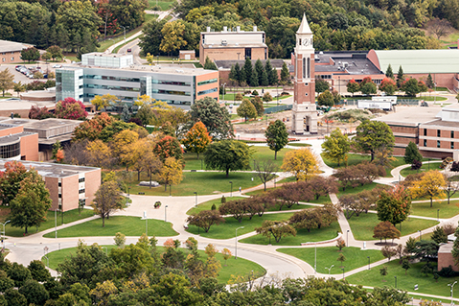 Rochester Hills-based Oakland University has announced a $150-million fundraising campaign, the largest in the school’s history. It has raised more than $50 million in the campaign’s quiet phase over the past two years.

About 66 percent of OU undergraduate students receive scholarships and grants, and almost all students at the institution work one or more jobs. Nearly 30 percent of the university’s students are first in their families to attend college.

“About 93 percent of our graduates stay right here in southeastern Michigan. As Oakland University grows stronger and richer and more diverse through excellence in education, so does our community, and so do we.”

“This gift by Mr. Lindsay and his foundation is a game-changer for OUCARES and our ability to provide outreach programming to our teenage and adult populations,” says Kristin Rohrbeck, director of OUCARES. “The generosity of this commitment will allow us to dramatically change the quality of life of so many families impacted by autism in our region.”

The center plans to use the gift to offer pre-employment training and develop social programs for teens and adults impacted by Autism Spectrum Disorder (ASD). It will also enhance programming for parents and caregivers of those with autism, allow the center to bring ASD speakers to campus, and provide scholarship funding.

“I hope that our support will not only help individuals with autism to be more active socially in OUCARES programs, but that it will have a positive impact on the entire family of the person who is involved at OUCARES,” says Lindsay. “We know that autism doesn’t only impact individuals; it impacts parents, caregivers, siblings, and many others who support the person with autism.”

The foundation has funded academic research and the continued work of autism programs around Michigan and across the country since 2001. The Center for Disease Control and Prevention estimates that at least one in 59 children are diagnosed with an ASD, a number that continues to grow.

“Because OUCARES operates as a nonprofit and is funded partly through donations, the power of this commitment, one of our single largest pledges to date for OUCARES, cannot be overstated,” says Pescovitz. “We are grateful to Mr. Lindsay and are committed to being good stewards of the trust he has put in us.”

The foundation was established by Lindsay and John Czarnecki, whose son has autism. It has raised more than $4 million with 13 percent allocated toward operating expenses. The donation to Oakland is the foundation’s second gift in excess of $1 million in less than two years following the creating of the Ted Lindsay Foundation HOPE Center at Beaumont Children’s Hospital in 2016. The foundation’s mission is to elevate public awareness regarding the need for increased funding and support for individuals with autism.

OU has offered an autism endorsement certificate for more than 30 years. The program has evolved into the center. OUCARES is the outreach services of the center and offers practicum training and internship placements for 10-25 students each year. It serves more than 2,300 individuals impacted by ASD annually through recreational programs, camps, and events.