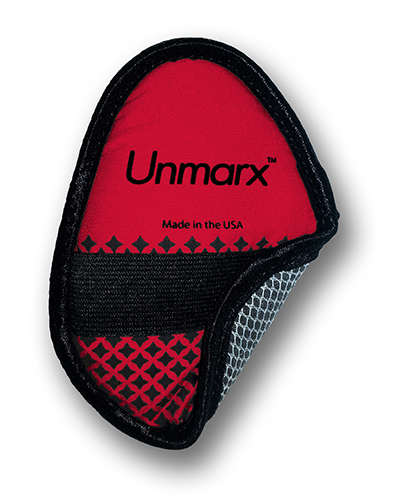 It’s been a year since sisters Stephanie and Nancy Tomovska of Rochester Hills began selling Unmarx, a reusable cleaning pad that removes deodorant marks, lint, pet hair, and powders from clothing. They’ve since doubled production, and their story is now featured in the newly-released second edition of The Mom Inventors Handbook: How to Turn Your Great Idea Into the Next Big Thing (McGraw-Hill) by Tamara Monosoff.

“We read the original handbook when we first started our company, so when we saw that they were going to publish a second edition, I submitted our story,” Stephanie Tomovska says. “There are about 40 entrepreneurs highlighted (in the book). We were spotlighted because we had gotten into mass retailers very early on in our first year.”

Unmarx is currently sold in more than 100 Walgreens stores in Michigan as well as numerous outlets for Whole Foods Market, Ace Hardware, pet stores, yoga studios, and boutiques, Nancy Tomovska says. “You don’t need any refills. You just briskly wipe away whatever it is that’s on your clothes, and it’s gone. It doesn’t stick to the pads,” she says.

Based in Rochester Hills, Unmarx manufactures about 5,000 units monthly at a plant in Roseville, a number the sisters hope to at least double by early 2015.

The sisters plan to expand their line to include Unmarx for Home and Unmarx for Auto. “The one for the home would be strictly for furniture — cloth, suede, or leather. And the automotive one would be to clean the car’s interior, dashboard, and things like that,” Nancy Tomovska says.