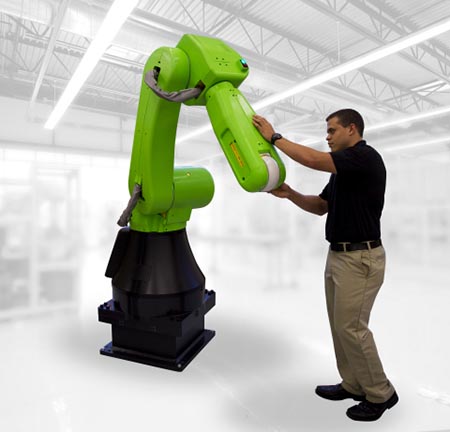 Rochester Hills-based FANUC America Corp. has introduced a new “collaborative” robot designed to work alongside employees without the need for safety fences.

“The highly sensitive robot gently stops if it comes in contact with the operator, allowing the robot and human to work side by side,” says Greg Buell, product manager for FANUC America, a manufacturer of industry-leading products and services for robotics, CNC systems, and factory automation.

Buell says the robot has a soft green cover to protect workers who are in direct contact with workers. He says the robot is able to handle heavy lifting, up to about 75 pounds.

“The CR-35iA can work alongside the employees assigned to this task to help reduce injuries associated with repetitive or heavy lifting,” Buell says.

He says the robot was designed to solve challenges that are physically demanding for humans, such as lifting a spare tire into vehicles on an assembly line. Buell says FANUC has units running in production at General Motors Co.

The robot can handle applications such as machine tending, higher payload mechanical assembly, packing, and tote or carton handling.

The collaborative robot will be available for general release in North America later this year.