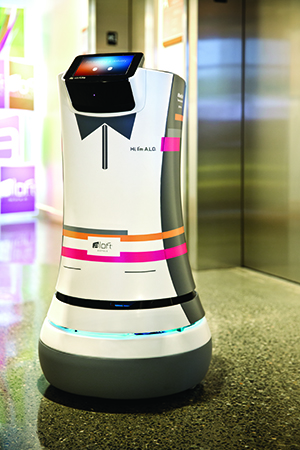 A robotic butler named Botlr — capable of assisting hotel staff in delivering amenities from the lobby to guest rooms — will be a temporary new feature at the Aloft Hotel inside the David Whitney Building in downtown Detroit beginning next month.

Botlr transports toothbrushes, snacks, towels, and cell phone chargers, among other items, autonomously. In addition, the robot is part of an effort by Aloft to make staying at its hotels a more digital experience for guests. Guests at the Aloft Hotel in Detroit are able to check into the hotel and access their room by using their smartphones.

“Detroit is a city known for innovation and forward thinking technology — and Botlr wanted to get in on the action,” says Paige Francis, vice president of global brand management for Aloft Hotels. “Besides, Detroit was one of the first cities to embrace robots when they were introduced and Botlr felt the need to pay respects to one of the first robotic hubs in the nation.”

Francis says Botlr is “dressed” in a custom shrink-wrapped, vinyl collared uniform and nametag. The robot is able to fully navigate the hotel and use the elevator. She says Botlr accepts Tweets instead of tips.

Botlr was designed by California-based Savioke, a company that creates autonomous robots for the services industry.

“We’ve seen the front desk get busy at times, and expect Botlr will be especially helpful at those times, freeing up human talent to interact with guests on a personal level,” says Steve Cousins, CEO of Savioke.

Botlr was first introduced at the Aloft Cupertino in California, and since then has traveled to the Aloft Miami South Beach and the Aloft Manhattan Downtown – Financial District. A robotic butler is permanently stationed at the Aloft Silicon Valley.

The Aloft Detroit, developed by The Roxbury Group in Detroit and VOS Hospitality, opened in December following a $94.5 million restoration. The hotel offers 136 rooms, with an average price of $180 to $200 per night, along with meeting rooms.

Marriott International Inc. entered into an agreement last week to acquire Starwood Hotels and Resorts for more than $12 billion.