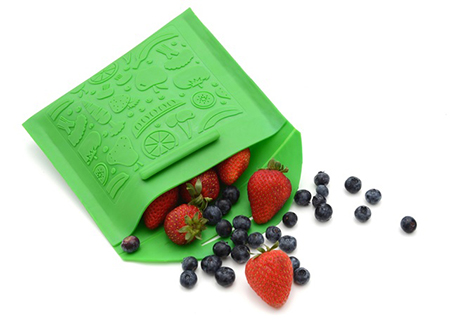 While living in China, Sherri French would pack lunches every day for her two daughters, and did not like throwing away the numerous plastic bags after they were used. She tried several ideas including fabric alternatives. While cute, they became stale and stinky after being laundered so many times.

Then French, with nearly 20 years in the automotive industry, came up with Spbang — a line of reusable snack bags, made from food-safe material in a bag form. The product took off and now sells in about 60 stores throughout the United States. While production started in China just over a year ago, French has moved back to Michigan and has relocated production to Mason, just south of Lansing.

“I never thought that my 17 years in the automotive industry would ever translate into a product that I made myself,” says French, a former quality engineer for a global automotive supplier. “But by taking injection molding and quality control, I was able to take all of those lessons and make (a reusable product) with a material you would normally find in the interior of car.”

What’s more, Spbang — which recently received approval to be a supplier for Whole Foods, and will likely enter the Troy and West Bloomfield stores by the end of this month — will launch a new product within the next three weeks, French says.

“About a month ago, we were at a tradeshow in Las Vegas, and I had five retailers ask me if you could color on the bags,” French says. “I had no idea, so I brought them home to my 13- and 7-year-olds, and we colored on them with everything.”

The result of their experiments? A new snack bag featuring the image of a notepad where parents can use a nonpermanent marker to write messages that will later wash off in the dishwasher.

Like the original snack bag, the updated concept will run for $9.99 and will be sold in stores such as Holiday Market in Royal Oak and Restyle Child in Birmingham.

However, over the last 12 months, French has found that Spbang’s audience is larger than expected. “I always had this idea that they were kid-focused, but I’ve found that housewares and (kitchen-oriented) shops and grocery stores are the ones that are most interested in the product.”

Looking forward, Spbang — named after the Canadian slang used to describe the sound that a wet tennis ball makes when it hits an aluminum garage door during a game of road hockey — will unveil a new product at the International Home and Housewares Show in March in Chicago.