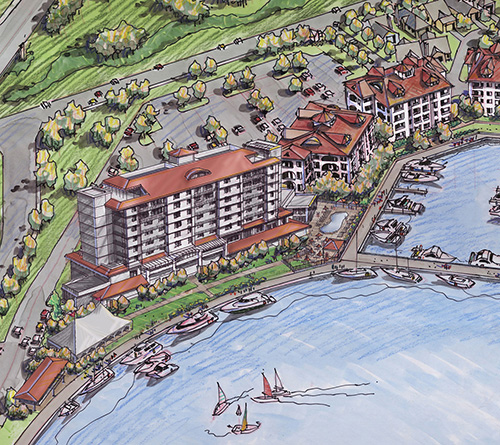 The Inn at Harbor Shores is set to open mid-May in the 530-acre Harbor Shores development in Benton Harbor and St. Joseph, says Ron Smith, a spokesman for the project.

“We think the market has been radically underserved,” says Smith, of the 92-room hotel.  “The St. Joseph area has been kind of overlooked over the years because it used to be an industrial center. People bypass us for South Haven, or stop early at New Buffalo. We aim to change that.”

Built in a style reminiscent of late 19th and early 20th century Lake Michigan hotels, the Inn at Harbor Shores is expected to employ up to 180 people in its peak season. In addition to a restaurant, a luxury spa, and a fitness center, the lodge will include 14 condos on its seventh and eight floors. Two condos should be available in time for the 75th Senior PGA Championship, to be held May 22-25 at Harbor Shores.

“The past champion, Roger Chapman, and his sons, want to stay in the condominium units while they’re here, so we’re busy finishing those two units,” Smith says. “They will become available as they are sold and finished — we’re not going to finish (the condos) ahead of time.”

The tournament first came to Benton Harbor in 2012, two years after the completion of the Jack Nicklaus Signature Design Golf Course at the Golf Club of Harbor Shores. “From the golf architect’s perspective, we received instant credibility,” says Kerry Wright, director of real estate for Harbor Shores.

Wright says the tournament is expected to bring 50,000 to 80,000 people to Harbor Shores, which will also host the championship again in 2016 and 2018. “Other than The Masters at Augusta National (Golf Club), there’s no other major golf championship that is hosted that frequently in the same location. To host it four times in eight years, that’s pretty amazing.”

For more information about the Harbor Shores development, visit harborshoreslife.com. For more about the Senior PGA Championship, visit pga.com/seniorpga.