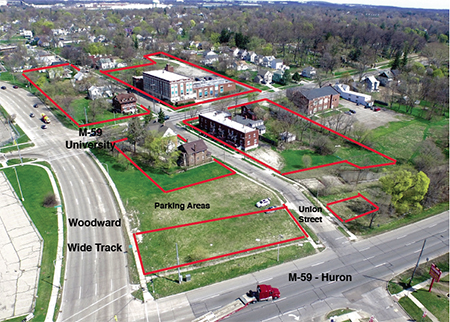 “The city of Pontiac has many of the largest parcels of land and buildings available in Oakland County, and is one of the wealthiest and most efficient counties in the country,” says Bill Salatino, a consultant for the Pontiac Gateway Development Project, a plan to develop residential units, corporate offices, and support services.

The property, which sits just outside the downtown loop at the corner of University Drive and Huron Street, is about a mile from St. Joseph Hospital and five miles from Oakland University and Oakland Community College’s Auburn Hills campus. FCA (Fiat Chrysler) U.S. Headquarters are three miles away.

Other efforts are also underway to restore and redevelop the city. In February, Pontiac Mayor Deirdre Waterman announced that The Blight Authority, city of Pontiac, and Oakland County have eliminated 305 of its 900 blighted homes since January 2014.

In turn, M-1 Concourse, an 87-acre mixed-use development with a test track and car garage condominiums will be built on the site of a now-demolished General Motors plant at Woodward and South Boulevard.

The project will include a 1.5-mile on-site test track along with 80,000 square feet of commercial space including leasable offices, restaurants, stores, and other amenities.

The city also is deciding on the future renovation of the Phoenix Center, a large parking deck downtown that is attached to two commercial offices buildings. The roof of the deck once offered an amphitheater, and numerous businesses in downtown Pontiac hope to see it reopen. The city recently lost a lawsuit in which it sought to tear down the parking deck.