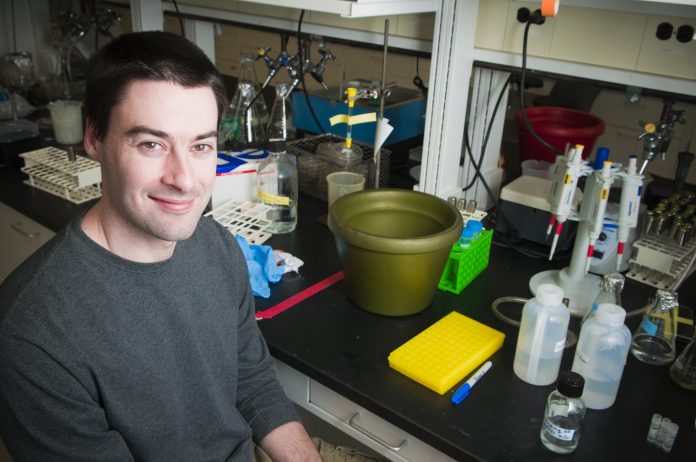 A team of microbiologists at Michigan State University in East Lansing has pinpointed a genetic weakness in the cholera bacteria’s armor that could lead to future treatments.

The current cholera pandemic began in Indonesia in 1961 and did not fade away like its six previous worldwide outbreak predecessors. In fact, the current strain is thriving.

But recently researchers from MSU and Tufts University discovered two key genetic changes that they say may have allowed the seventh pandemic to thrive for more than 50 years – a signaling network for a new bacterial signal, or cyclic GMP-AMP (cGAMP), in the human cholera pathogen, as well as the first protein receptor of cGAMP as a phospholipase enzyme that remodels the V. cholerae membrane when cGAMP is produced.

“When this pandemic emerged, it virtually displaced all of the other V. cholera isolates, or previous strains, on a worldwide scale,” says Chris Waters, an MSU microbiology professor who co-led the study with Wai-Leung Ng, a Tufts microbiologist. “No one really knows why this happened. Our discovery of cGAMP synthase and phospholipase, which are present only in the seventh pandemic, could be key drivers of the seventh cholera pandemic.”

The evolution of the new signaling ability has contributed to the current strain, which has caused around 95,000 deaths each year. Last year, more than 1 million people in Yemen contracted cholera and nearly 2,200 people died, making it one of the largest cholera outbreaks in world history.

The next step for the scientists is to find a way to turn the bacteria’s greatest strengths against itself.

“We think this new system is one of the key elements that led to the emergence and persistence of the current pandemic,” says Ng. “Our future research will try to understand the role that the cGAMP/phospholipase system played in this emergence.”

The research was funded by the National Institutes of Health, the National Science Foundation, and the Department of Energy.