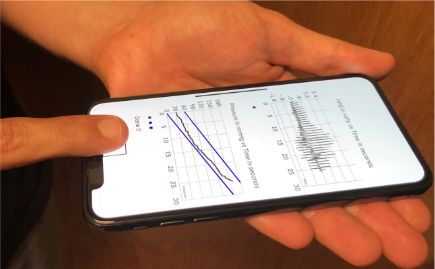 East Lansing’s Michigan State University researchers have invented a blood pressure app that can give accurate readings using an iPhone with no special equipment. The app could be available in late 2019.

The discovery was made by a team of scientists led by Ramakrishna Mukkamala, an electrical and computer engineering professor at MSU.

“By leveraging optical and force sensors already in smartphones for taking selfies and employing peek and pop, we’ve invented a practical tool to keep tabs on blood pressure,” says Mukkamala. “Such ubiquitous blood pressure monitoring may improve hypertension awareness and control rates and thereby help reduce the incidence of cardiovascular disease and mortality.”

Peek and pop allows users to open functions and apps by applying pressure to a finger on a phone screen, adding to traditional motions of tapping and swiping. Peek and pop is standard on many iPhones and some Android models.

In a publication in Science Translational Medicine earlier this year, Mukkamala’s team had proposed the concept with the invention of a blood pressure app and hardware. With the combination of a smartphone and add-on optical and force sensors, the team produced a device that rivaled arm-cuff readings, which are the standard in most medical settings.

The add-on optical and force sensors may no longer be needed with advances in smartphones – peek and pop technology, or placing a finger on a phone screen and applying pressure, could be used instead.

“Like our original device, the application still needs to be validated in a standard regulatory test,” says Mukkamala. “But because no additional hardware is needed, we believe the app could reach society faster.”

While high blood pressure is treatable with lifestyle changes and medication, only about 20 percent of people have the condition under control. An app like this would give patients a convenient option to check blood pressure and keep a log of daily measurements to produce an accurate average.

The research was funded in part by the National Institutes of Health and is featured in the current issue of Scientific Reports.

In other MSU news, the school’s Institute for Cyber-Enabled Research has announced it has been awarded a three-year $269,547 grant from the National Science Foundation International Research Experience for Students to support U.S.-China collaboration on the development and enhancement of software and algorithms for supercomputers with emerging architectures.

The grant will fully fund summer research opportunities for U.S. doctoral candidates to work on computational science applications that benefit from the strengths of the TaihuLight Supercomputer in Wuxi, China.