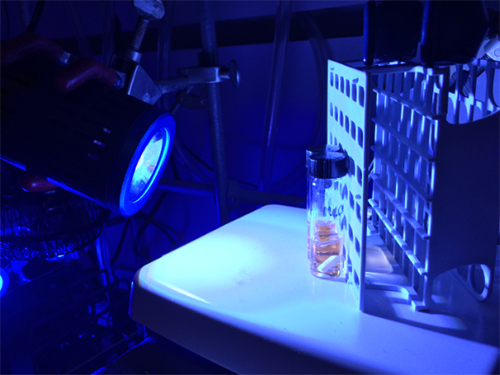 Researchers at the University of Michigan in Ann Arbor have discovered a drug building block that can replace those currently used in medications that can be harmful to livers.

Many medications contain a component of the drug known as an aniline, which breaks down in the liver, where it can produce toxic metabolites.

“Aniline is a common structure that’s easy to make,” says Corey Stephenson, a professor of chemistry at U-M. “The problem with anilines is that they are readily metabolized by our liver, and that can create problems. We want our drugs to be metabolized, but not in a way that causes them to have toxic effects.”

The research team began looking into structures called aminocyclopropanes and found they can use light to convert them into a different compound called a 1-aminonorbornane, which is not metabolized in harmful ways by liver enzymes. The compound is more complex and traditionally difficult to synthesize.

“We realized that we can use these aminonorbornane cores as a substitute for an aniline,” says Daryl Staveness, a postdoctoral researcher at U-M and American Cancer Society fellow. “Usually, drug companies will need to re-engineer drugs that use it to avoid that oxidation event. But in using aminonorbornanes, we don’t have to worry about those metabolic processing issues.”

Because the reaction needed to produce the molecule is powered by visible light, 1-aminonorbornanes can be produced cheaply, sustainably, and on a large scale.

The team used photoredox catalysis, a special brand of photochemistry in which catalysts, or compounds that facilitate a chemical reaction, operate by using the energy of visible light to move electrons between molecules.

The compounds were then added to liver fragments containing the enzymes that typically metabolize drug compounds and found that when the enzymes broke down the 1-aminonorbornanes, the process did not produce the harmful metabolites that result from anilines.

The team says the study is foundational work and plans to apply it to a wide range of applications, including epilepsy, hearing loss, cancer, and fungicides.