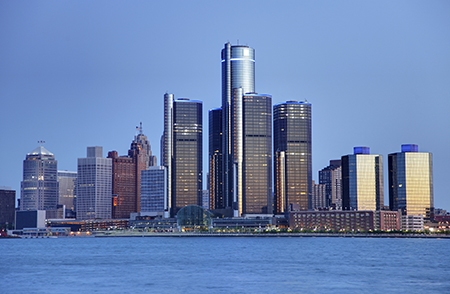 “Detroit will battle for every ounce of economic momentum it is able to achieve in 2015,” according to the report, which was released Thursday. “The market area is coming off of a virtually flat labor market performance, and income growth has slowed — but not stalled — as a result.”

PNC Economist Kurt Rankin says the 2015 outlook has more of an optimistic tone when compared to previous reports he’s written about southeast Michigan over the past year. The housing market continues to improve with prices on the rise, and the region’s strong ties to manufacturing and the automotive industry will continue to drive growth.

“As far as new technologies go, U.S. automakers are no longer lagging behind their foreign competitors,” Rankin says. “There’s a lot of new technology coming out of U.S. automakers, which is helping to keep Detroit’s manufacturing base growing, which it will continue to do this year.”

He adds while it’s important for the city to attract a diversified base of industries and markets, adding new business is something to focus on in the long term. “Right now, stabilization is key,” he says.

What’s critical for metro Detroit in the coming year is that business and consumer sentiment start to have a brighter outlook on a near-term. “That can get consumer spending flowing, which could permanently stabilize the industrial base,” Rankin says.