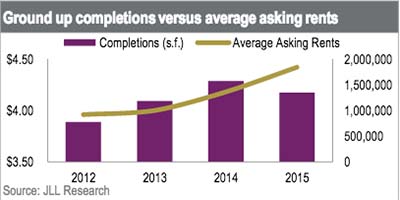 Due to significant demand for industrial space and dwindling supply, metro Detroit’s industrial market is waiting for developers to take on large-scale speculative construction, according to a metro Detroit industrial outlook report for the final quarter of 2015 by JLL Detroit, an investment management firm.

“The industrial market has tightened up a great deal over the last 12 months,” says Dave MacDonald, executive vice president for brokerage at JLL Detroit. “It’s to the point where it’s very difficult to find large blocks of good space, and the market is really waiting for some new construction to help fill the void.”

MacDonald says with the average rent in metro Detroit at $4.42 a square foot, developers are hesitant to start speculative construction until rents are more than $5 a square foot.

He says in 2016, he predicts some developers will start to build new spaces.

“There may be a jump in the rates that tenants are paying, but at this point, (I predict) they’ll accept those higher rates than what they have been paying just because of the demand,” MacDonald says.

He says he expects there will be new construction this year in the I-275 corridor, between Romulus and Novi, and also in Sterling Heights.

IN RELATED INDUSTRIAL CONSTRUCTION NEWS, the overall vacancy rate fell to 6.6 percent during the fourth quarter of 2015, as more than 2.5 million square feet was absorbed in metro Detroit, according to the national commercial real estate advisory firm Newmark Grubb Knight Frank, which has an office in Farmington Hills.

“Companies are looking for places to expand, so it’s not surprising they are taking advantage of the opportunities the city of Detroit brings in terms of available land for development,” Liesveld says.

He says four other projects totaling over 1.2 million square feet are currently under construction in Detroit.