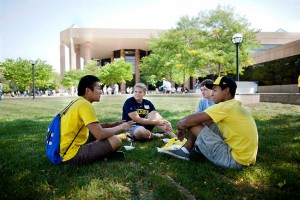 Michigan’s University Research Corridor (Michigan State University, University of Michigan, and Wayne State University) ranks No. 1 in medical degrees, second in advanced degrees in high-tech fields, and first in total degrees awarded when compared to research clusters across the nation, according to a report released today at the Mackinac Policy Conference.

More than half of the alumni of the three universities live in Michigan and comprise a third of the state bachelor’s degree holders and advanced degree holders 25 and over. The report says the research corridor granted about 32,600 degrees in 2013, ranking first among peer clusters. About 9,200 of those degrees were in high-demand.

The study found students from Michigan are more likely to live in the state later in life if they attend a university here. Michigan cities where college graduates choose to live are Ann Arbor, where 82 percent of the population has a college degree, and East Lansing, with 85 percent of the population having degrees, along with Midtown Detroit (31 percent), Michigan (27 percent), and Detroit (13 percent).