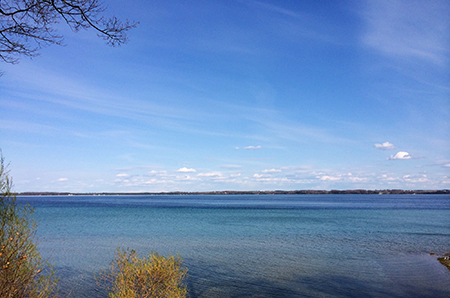 With Michigan’s 3,000-plus miles of Great Lakes freshwater coastline, 11,000 inland lakes, hundreds of rivers, and coastal and inland wetlands, it’s no surprise more than one in five jobs in Michigan are linked to water.

However, according to a report released today, “Michigan, through strategic actions could expand and grow the state's already impressive Blue Economy, to become the world's freshwater capital and water innovation center.”

The report found the transportation, ports, and shipping industries in Michigan contributed $3 billion to the state’s economy. Water place making activities, such as water cleanup, recreation, and waterfront development account for more than 175,000 jobs in the state and contribute $12.5 billion to the economy annually.

"Michigan already is a leading center of water (R&D), invention, and new smart water technologies and business development," says John Austin, lead author of the report by Prima Civitas, a nonprofit economic development organization and Grand Valley State University. "Michigan can show the rest of the world how to be smart stewards of freshwater, and become the nation's leader in water-based jobs and economic development.”

The report’s authors say Michigan companies that take advantage of Michigan’s water industry include Ford Motor Co. in Dearborn, which is considered one of the greenest companies in the world when considering smart water use. Benton Harbor-based Whirlpool, meanwhile, manufactures water efficient appliances and kitchens.

The report praises water research and education programs in the state, but suggested the creation of a public-private partnership to bring companies and researchers together to solve water treatment and new technology development issues.