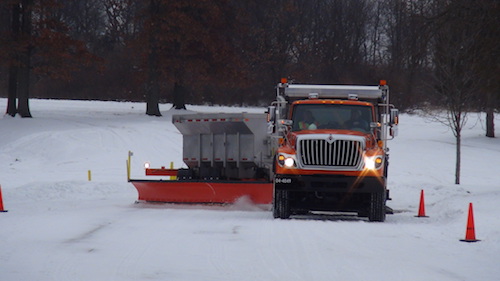 Michigan could save $4.8 million on its annual snowplowing bill by deploying tow plows, says a new report developed by Southfield-based Lawrence Technological University.

According to the study, which was commissioned by the Michigan Department of Transportation and funded in part by the Federal Highway Administration, if state and county road maintenance officials had access to 42 tow plows, it would save millions of dollars in personnel and other operating costs during a standard winter.

Tow plows can plow a 24-foot-wide path down a road, which is large enough to clear a three lane freeway in two passes compared to four or five passes using standard plow trucks. This, according to officials with Lawrence Tech, would enable lanes to be cleared faster.

The report makes its projections after more than two years of testing and analysis of the Michigan’s current fleet of 14 tow plows, which are stored in 11 road maintenance garages around the state.

“This study says to me that this new tool is safe and effective,” says Melissa Howe, region support engineer in maintenance field services for MDOT. “We’ll see direct savings, and savings on the part of drivers in delays avoided.”

Just by using the current fleet regularly, the report shows that Michigan could save $1.4 million a year in snow removal operating costs. The savings increase with the addition of more tow plows.

By analyzing travel speeds on I-96 near Lansing when tow plows were tested, the report estimates more than $100,000 in travel delay costs could be averted.

Officials with Lawrence Tech say that state officials prefer the use of tow plows, which are manufactured in Missouri, and cost $90,000 each.