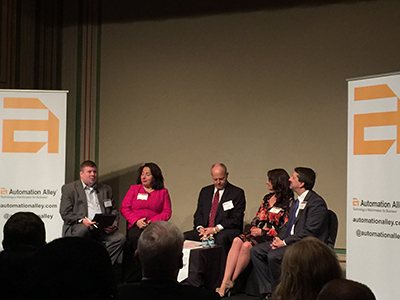 More than 80 percent of technology company executives in metro Detroit believe tech companies have greater return on investment in the region compared with less than 70 percent of their counterparts in Silicon Valley who feel the same about their region, according to a report released today by Troy-based Automation Alley, a non-profit technology business accelerator.

“No need to get on a plane, take a train, and head for a better technology center than what we have right here in southeast Michigan,” says Ken Rogers, executive director of Automation Alley, at a Technology Industry Outlook event held today at the Detroit Institute of Arts. “We compete with the best and brightest in America.”

Automation Alley’s 2016 Technology Industry Report is a combination of two studies including a technology industry data collection and analysis, along with an online survey of 150 senior executives who are working in the tech industry in either metro Detroit or Silicon Valley.

The survey found 99 percent of metro Detroit tech executives project revenue growth in 2016, with more than 80 percent expecting to increase their company’s R&D spending and about the same percentage expecting to hire more talent in the coming year.

“The economy has gone from, ‘Can it get any worse?’ to ‘Michigan is leading the way,’” says Bob Metzger, director of business marketing at Michigan Economic Development Corp. “It’s time to stop being humble about Michigan’s technology sector.”

Tom Kelly, COO of Automation Alley, says there were more than 9,000 science, technology, engineering, and mathematics college graduates (STEM) in metro Detroit in 2015, compared to 5,000 in the San Jose area.

Louay Chamra, director of Oakland University’s school of engineering and computer science in Rochester Hills, says talent acquisition and retention was one of his chief concerns regarding the future of Detroit’s tech scene.

“We need to make sure both genders are engaged in STEM throughout K-12 and beyond,” Chamra says. “We might have more STEM (college) graduates than Silicon Valley, but do they have the skills the industry needs?”