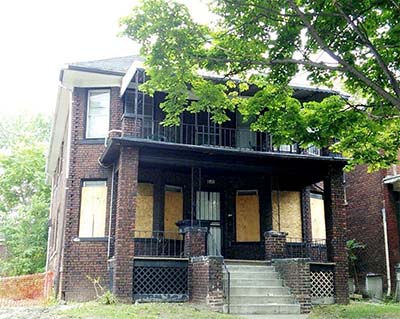 Of the nearly 6,000 occupied Detroit homes sold last year at auction, one in six homes is now vacant and many are in poor condition and should be demolished, says a report from Detroit-based Loveland Technologies, a data company that tracks every parcel in the city.

“One in six of (the previously occupied foreclosed homes) is now empty, now dilapidating, and now contributing to the blight problem and the cost of cleanup,” says Jerry Paffendorf, CEO and co-founder of Loveland Technologies. “This is a really big deal. This is an issue that continues to run in the background, it costs the city a lot of money, it costs its people incredible headaches. This report is another effort to add a lens saying, ‘What are we doing to ourselves here?'”

Paffendorf says Loveland resurveyed the nearly 6,000 homes that were occupied at the time of last year’s Wayne County tax foreclosure auction to see how many remained occupied. The survey says nearly 1,000 homes are now vacant and the conditions of the homes have diminished. Of the occupied homes considered to be in good or fair condition, 160 are now surveyed poor and more than 20 are suggested for demolition.

“You can see the process which often takes place where somebody living in the home either feels uncertain enough where they feel like they need to leave, or they’re evicted by a new owner, or through other circumstances encouraged by the foreclosure process (to leave), and the home goes from habitable to degraded,” Paffendorf says.

The Wayne County Treasurer is currently holding a tax foreclosure home auction, with about 8,000 homes occupied homes being auctioned. Paffendorf says moving forward, property taxes should be reassessed and the state should analyze its current tax foreclosure law.

“(Wayne County) just can’t pretend that all properties are vacant properties, and they can just be treated as foreclosed and sell it and that’s a reasonable thing to do with no social services, and no outreach to understand the individual case,” he says.â€‹